It does look like they could have something starting, lots more to go.

When you get a chance can you get some photos , standing directly behind them and down at their level, say 5m back from them. It will give us an indication on how the foal is currently riding (positioned)

I'm actually going to be the voice of dissent here - with the caveat that I've bred a lot of big horses, and not minis.

However, these mares look large - but not necessarily close to foaling. In my experience, udder development is meaningless.

I've had experienced broodmares that bag up like dairy cows far before they're close to ready (not due to placentitis, just because their bodies know what's coming) and I've had maiden mares who didn't develop an udder until after the foal was out and their body realized what was happening.

What I *would* watch for is a deepening V in their bellies and a loosening of their butts, for lack of better phrasing.

When a foal moves into position to be born, they're basically sitting on the bottom of the mare's belly, prepping to swan dive on out. This typically creates an abnormal shape on the mare's belly where they're a little less round and a little more angular than usual and in some mares can be quite a dramatic V shape.

The other thing their body will do, udders be damned, is loosen everything around the birth canal. I know you can't really get your hands super close to these girls yet, but in most mares when they're super close to foaling you can almost bend their tails up over their backs. The elasticity has to come in order for a foal to be able to make their exit - a lot of times that elasticity will show up with a complete muscle drop around the tail head.

Here's a photo of one of my mares a couple of years ago - two days prior to foaling one of the biggest fillies I've ever had. This is a mare who bags up early and could probably milk three foals with her udder. The edema on her belly had been there for a couple of weeks prior to her actually letting go. You can see though how her belly is dropped down with the foal sitting more down; you can also see where the muscles around her tail head have dropped off and her tail looks very prominent. 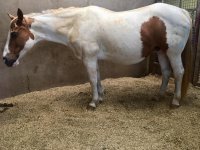 Someone online (not sure who to give credit to) made this great graphic of a foal overlaid on a photo of a mare, if you're a visual person when we talk about the foal moving into position: 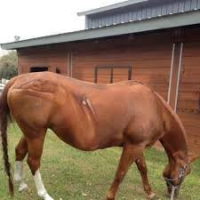 Instead of having a rounded, normally formed "hip" - they can get very angular. It's hard to see the extreme in my picture of the white mare, so I'm borrowing this photo with the source linked below. You can see how, due to the relaxing of the muscles around the birth canal - the mare has gone from having a very normal, rounded hip, to having a very flat, angular, almost emaciated looking hip. This can be a clear indicator that your mare is getting ready to foal.
(Source: Normal signs of behaviour before and including foaling in mares - Breeding - Horsetalk.co.nz)

Best of luck to you! If they do end up being pregnant, we demand photos!
C

That's a nice mare you have there Arrelle!

Cayuse said:
That's a nice mare you have there Arrelle!
Click to expand...

Thanks! She’s a good girl with some fantastic old APHA lines; unfortunately, she has had cancer (squamous cell carcinoma) since I got her in 2016 and I retired her from breeding after her 2018 filly.

Her 2017 filly is going nicely under saddle currently - this was two days after that photo above - I bred for a western pleasure horse and I’ve somehow ended up with a leggy, now almost 16hh mare.

Little update- The girls are doing really well. Every day we make more progress and I can see where little by little we are gaining trust with Baby. We found the key to haltering her without it goung rodeo is to halter up Scarlett and walk her out of the barn first. Baby wants to fallow her so badly she just stands there and let's me halter her. I know at some point we are going to have to work on her finding her independence/ confidence without Scarlett as her crutch but we are a long way from that. I can say Baby has come a long way for it only being a short amount of time. Im actually glad they have more time before foaling bc it's giving us time to build a relationship with them.

Also I just want to thank everyone for their advice and suggestions! This is a nerve wracking and exciting first for us! I'm hoping they wait until fall for babies (if they do have babies) when it's much cooler out. We avoid summer kidding bc of the heat and how miserable it is for the goats.

They look great and so happy you are bonding with them. Have either started an udder yet ?

Looking from behind , The black and white Pinto looks pregnant to me
P

These pics were taken a couple days ago. The angle is terrible on Baby's she's not a big fan of me being by her rear or my phone under her. Some days I can get a great pic and others this is as good as it gets.
First pic is Baby
Second is Scarlett

It's hard to get a decent pic of Baby from the back she always turns her head to look and see what im doing or she shifts side to side. She don't have the wide load happening that Scarlett has. Is it possible for her to carry down not out? Her belly has grown (maybe she's just fat??)
P

This is Scarletts udder over the last month

This is one I took of baby last week. She hasn't been letting me hold the phone under her lately but seeing her teats like this is new. A few weeks ago they were not visible unless you risked a kick and bent down to look for them

You're doing great with them, I love that everyone is out with them!
I think they both look in foal. I'm not going to be much help about when but they don't look there yet going by the book. I'm guessing a couple more months but that's just a guess. Keep watching, hopefully they will give you some good signs when they are close.
P

These were taken this morning

First is Scarlett
Second is Baby

Will Scarlett let you feel what's going on? I find it works better than looking when they are 'warming up' to an udder. Any chance you can give her a hug around her belly either right after she's gone for a bit of a run or while she's having some grain? You might be able to feel something. Be warned if you do you will feel digestion and breathing, wait for a push out on one side or something really definite before you get excited.
P

Taz, I did as you suggested and hugged Scarlett and sure enough felt the foal.
I have a question for everyone. How do you handle fireworks? We had the mares in the barn and they still went nuts. Absolute chaos and fear. Nothing we did helped and poor Scarlett is still half heartedly eating her feed. She's definitely feeling off, she's not her greedy eating self. Is this normal from a really bad firework scare? She's eating but not as eagerly as before the 4th. Baby was back to normal yesterday I don't want to panic if this is a normal reaction to a high stress event. Our quarter horse has never cared about fireworks and prefers the field to the barn during fireworks. He was out grazing during the over the top shows the neighbors were having. It sounded like a war zone from all sides here.
Last edited: Jul 6, 2021
J

Pumpkincreek71 said:
Tax I did as you suggested and hugged Scarlett and sure enough felt the foal.
I have a question for everyone. How do you handle fireworks? We had the mares in the barn and they still went nuts. Absolute chaos and fear. Nothing we did helped and poor Scarlett is still half heartedly eating her feed. She's definitely feeling off, she's not her greedy eating self. Is this normal from a really bad firework scare? She's eating but not as eagerly as before the 4th. Baby was back to normal yesterday I don't want to panic if this is a normal reaction to a high stress event. Our quarter horse has never cared about fireworks and prefers the field to the barn during fireworks. He was out grazing during the over the top shows the neighbors were having. It sounded like a war zone from all sides here.
Click to expand...

Yes, it's normal for horses to be scared at fireworks or gunshots, and one of the symptoms include not eating, so you don't need to panic...just keep an eye on her though.

Maybe next time try earplugs (made especially for horses), except you would need to supervise the horses... but at least, it will help with the noise, and anyway, being around can help them stay calmer. Apparently, playing music in the barn can also help mask loud bangs, and can keep your horses focused on something else.

And BTW, you did well to bring them in the barn, even they were very spooked. If you have fireworks going off too close to their pasture, you don't want them to break away because they were scared... And the barn is way better in terms of noise.

I'd also go out and let the neighbors know you have horses and that they were scared of the fireworks. Just to let them know.
P

Do you have any recommendations on websites for the ear plugs? The kids and I stayed with them until the fireworks stopped @1am. We played music and tried to take their focus off the fireworks. We are surrounded by neighborhoods, I posted on the nextdoor app about fireworks being scary for livestock. They didn't care just had a few comments to put them in the barn

I should have taken a video of them in their stall to post before NYE.

These are Scarlett this morning. I hate this for her.

Oh your poor girls! Hoping Scarlett calms down soon. I get almost no fireworks here and the horses don't seem upset at all, it's probably all the gun shots they hear the rest of the time . Maybe try some desensitizing with popping balloons and cap guns at a distance first? AFTER they foal. Thrilled you felt a foal move! That udder still has a lot of filling to do but her belly looks nice and lopsided