I've been reading with interest Carly Rae's recent post. In her "When do colts mature" thread, she asks about conformation. During my approximately 4 years on this forum, this topic has been discussed, often with line drawings.

I've started this thread with pictures of my own horses as an educational thread. My hope is that folks with paint programs on their computers will be able to draw in lines that explain our critiques.

First I'll post Spanky. Seven year old 32.5" gelding who was gelded in March of this year.

When I look at him, just an overall impression is a balanced, powerful draft-type gelding. He is in pasture condition. His body appears more as a square....he's about as long from shoulder point to buttock as he is from top of wither to ground. The angle from top of shoulder (scapula) to point of shoulder, and from there to elbow is about the same angle as from point of hip to point of buttock and then to point of stifle.

He has an adequate shape to neck. Length is the minimum acceptable to keep him in balance with his body. His throat latch is thick with just enough shape to allow him to break at the poll and carry a bridle comfortably while working. In this picture, if you look at the underline of his neck you will see a downward bulge. Normally this would be a ewe neck. However, if you look at the shape of his crest, you see an appropriate hook for a draft type horse.

His shoulder, like his hindquarters, is powerful. It is long but just a bit straight. He has a nice length from point of shoulder to elbow, almost equal in length to his scapula.

If you look carefully at his front legs, you will see he is just a bit back at the knees (calf-kneed). The cannon bone tilts back just the tiniest bit from knee to pastern. What will keep him sound during work is his density of bone along with strong straight tendons. He has clean joints. I'd like to see them a bit more flt and less round. He has straight, short pasterns. I think that if they were a bit longer you'd see nice angles. However, as a draft type they are appropriate. If you look at him from the front, you'll also see that his cannons are offset just a bit to the inside. Well developed muscular forearms.

His ribs are well sprung and he has a smooth deep body, again conveying power. He has both a short back and loin, with depth and muscularity. Moderately round hindquarters with a lot of depth from top of croup to stifle. His tail is as low set as I personally will accept. In his hind shot, you can see he has wide square hips with his hind legs well set. If you look carefully at his hind cannons, you will see the are mildly offse to the inside, causing a cow-hock stance. Some Sport horse people look for just a bit of this hindquarter shape, as they feel this prevents interference and allows a horse to really sit back on his haunches.

Last, his head. He has very large, soft eyes and small upright ears. Again, he has adequate hook to poll, ehich is saved from tightness by a very large wide-spaced jowl. He has a pleasant shape to his head. A shallow mouth means I need to keep awareness of bridle fit to prevent misplacing the bit. He was a curious, easy-going but not to be bullied personality.

My connection is so slow that by the time I corrected my typos, it wouldn't let me post them! :-(

Please don't let me look like a dweeb!! Will you correct them for me? Also, will you change his front leg "offset to the INSIDE" instead of outside?

Thank you so very much...

This is my herd.

Goldie - 32" draft/shetland type. Cow hocked, probably club footed, croup high, camped under sometimes, long back. Pretty head though. Her legs dont match her body (This is just my own personal views. Others may vary..)

In general i think his conformation is good (open to correction) he has a large head though. (champion in shows)

Again, i think she has good conformation. She is holding more weight in this pic than needed, so i think it makes her neck look a bit weird and her croup fatter. Ive seen thinner pis and she hasn't got that as much (champion in shows)

I think banner has excellent conformation. He is very compact and straight but potential clubby foot att the front. He has been mistaken for a welsh before from photos, so the object of miniature horse has been achieved there! (champion in shows)

I love these type posts. I always see and learn something.

This is one of my Shetlands--he is a little too tall to be Miniature, but if I could find this pony in 36" size, he would be my ideal Miniature.

He has excellent length of hip, good length of shoulder, and it is well laid back. His shoulder, back and hip divide quite well into thirds. His neck is fine and nicely shaped, and it is set on nice and high. His legs are properly set on; his bone is refined without being too light; it is good flat bone, not round, and not at all coarse. This pony's topline allows him to round his back and get his hind legs well under him; I do not need to see him move to know that he will have excellent movement. In actual fact he has length of stride as well as elevation, and his rear action matches his front action--no dragging the hind legs along behind.

His one fault--his head. He could have a prettier head.

This is a yearling Mini; a little too fat. He has a nice shoulder and very good length of hip. His neck is set on quite well, but is a little too short and thick. He has good bone; actually a little bit heavier bone than I like to see, it borders on coarse. His hocks are a little meaty.

This is Rowdy, a horse I am trying out. Have not measured him yet (he is not registered) but I think he is about 35". He has been living in a pen almost all his life so lacks muscle tone. I think some protein and workouts will improve him. He is 6-7 years old.

I think his back is rather long. What are pros and cons of a long back?

All cons unfortunately. Weaker so they can carry less weight, makes them less likely to track up. Probably more cons but I can't think of any.

An extremely long back will have trouble tracking up; from the photo your guy does not look that much too long in the back.

A long back can be weaker for carrying weight but that is more of an issue with a riding horse. For a driving horse it should not be a big issue.

I strongly recommend to everyone to study and learn what good shoulder angles look like. Also study and learn about good length of hips. Short hip is such a common fault in Miniatures--so, apparently, is straight shoulder. Many breeders are working on eliminating those two faults from their horses--but I still see too many who do not recognize these faults when they have them in their horses.

I would love more info on length of hip? Not sure where to measure.
F

This is my Reba, a hackney (?) x Arab x something short with color. I bought her for a very specific purpose. I wanted a kick butt driving horse, I could occasionally throw a leg over, that was full of presence and impulsiveness, but safe as safe can be. I have multiple TBIs (traumatic brain injuries) and wanted an upper level show horse that's move wouldn't make me motion sick when I rode that I could trust.

My mothers big rocking dressage type appy makes me so motion sick at a trot or canter it's not funny. I needed something super super smooth, and she delivers. I can sit her extended trot like a boss kind of smooth.

Her face! So cute and Arab-y

Her move, big but smooth mover

Her neck. It's a little short, but well put together so I can tolerate it, it comes off correctly

Maybe her Pasterns, they are a little long, but she's still growing, we will see

These were her the day I brought her home - 1.5 years old 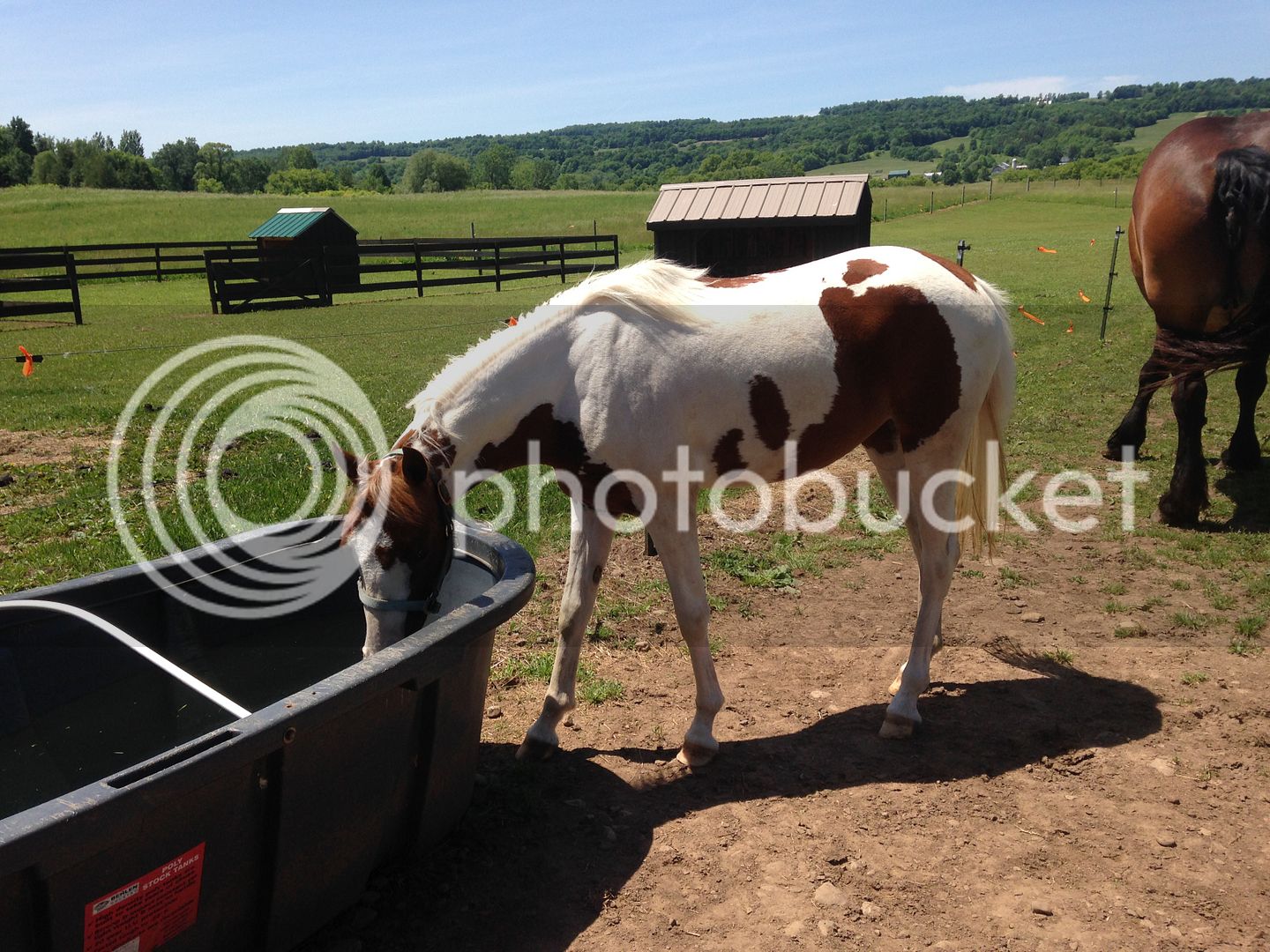 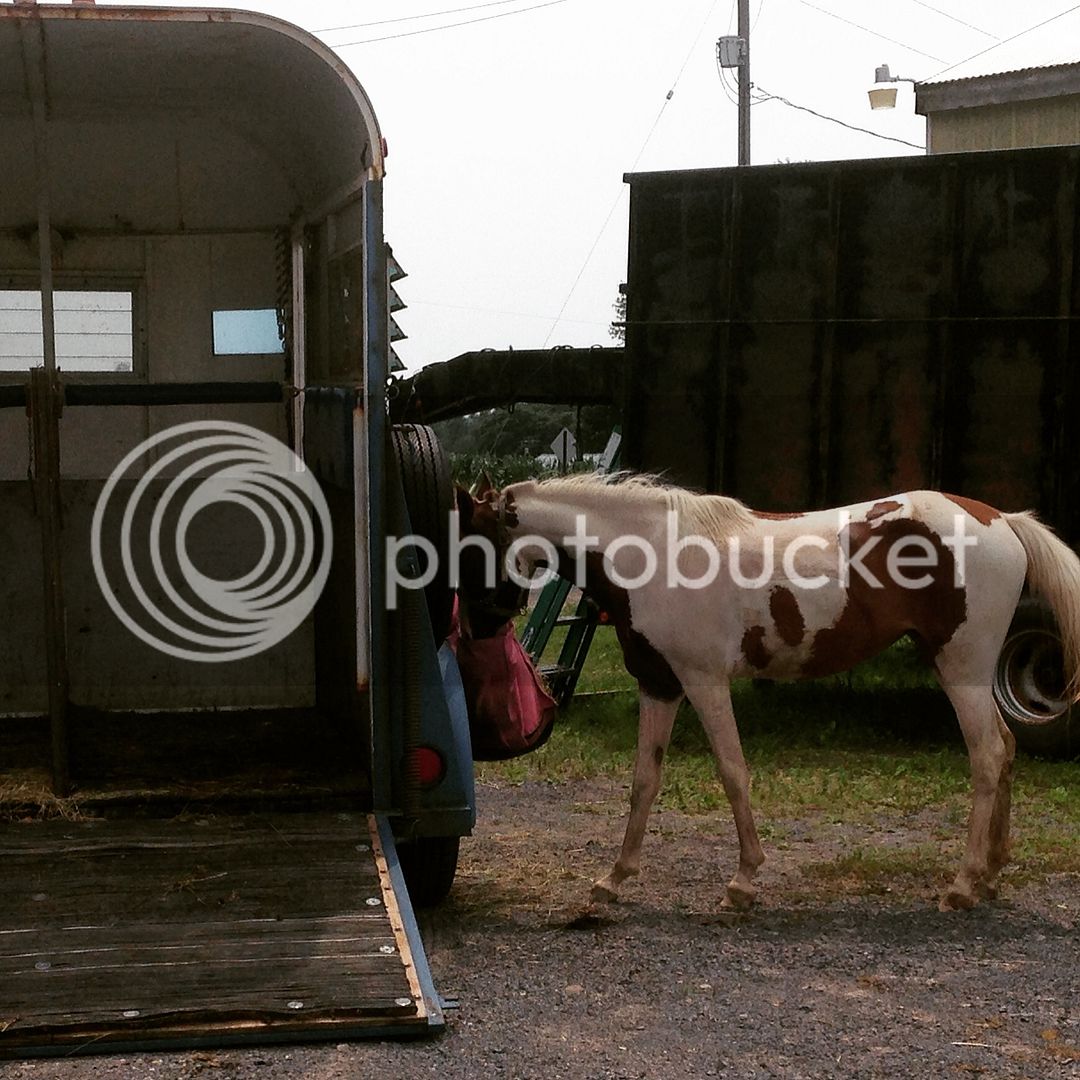 I love this topic...

But I wish people would be more descriptive in their analyses.

I think I know what "dwarf-y" hooves look like, and I think I can recognize "dwarf-y" heads, but other than that, I look at some of these photos and don't know what to think. I think some of them look rather nice. So when people are commenting, I sure wish they would explain things a little better for stupid-challenged people like me. For example, any guidelines on what constitutes a "large head?" ...or what constitutes a "nice" shoulder or the correct length of hip? Or if the mini horse has a long back, it appears that it would affect the horse's ability to carry weight (...but if it's a mini, it's not being ridden, so does that only matter on carts OR????)
Last edited by a moderator: Sep 10, 2015

I do not have drawings on my phone so cannot post pix showing angles and such at this time.
You must log in or register to reply here.

G
When to send my mini colt to a trainer? Round pen?

We were gonna sell Apaché