Thunder was colicky today so I took him to the vet. I think I caught it pretty early so that’s a plus. They had to put the tube up his nose which goes to his stomach to get mineral oil in him to help soften his poop. No sedation at all, he was a little champ! This is the second time now that he has colic, the first time being in the spring. I think it is from increasing his grass time, so I have pretty much decided to keep him off grass. I am going to try to keep his diet as consistent as possible. I think since he is a dwarf that is contributing to him being prone to colic and I don’t want to take any chances with him…. He is just too precious to me.

He pooped on the way to and from the vet, we got home at 12:30 today, and he hasn’t pooped since. He is acting normal now so I am suppose to give him his ration balancer and half his hay portion tonight. I am very fortunate though, my vet lives next door!!!!!! Woohoo!!!

I have had horses for over 14 years now and Thunder is the only horse I have had that has colic. Any ideas or suggestions would be greatly appreciated!! I did go buy some electrolytes for him and everyone.

Poor Thunder with the tube up his nose.
T

He's getting impaction colic not gas both times? Normally going onto more grass will cause gas or loose poop. How well does he drink? One of the old but good 'remedies' is a warm bran mash once a week. Since they're not used to it it irritates the bowel just a bit and helps keep thinks moving. Lots of water and roughage is the best diet for it, does he get salt in his feed? Very glad he's doing better.

I just went out to check on him and he pooped, woohoo! Finally!! 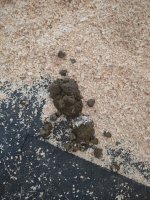 Vet tech saw the poop in my van from when we first arrived at the clinic and said it looked pretty dry. Yes, the vet seemed to think it was colic and not just gas. The first time was a more moderate case, this one I would say was a mild case. I am not sure how he drinks, all 4 are usually together. Today I put him in his stall by himself and I feel he is drinking pretty good. The vet recommended I get him some electrolytes to encourage drinking even more. Yes, they have salt and mineral licks in their paddock.

Whats warm bran mash? And I wonder how much would I serve a 120 pound little Thunderbolt?
Last edited: Aug 19, 2021
T

You can put a teaspoon or so of salt in his feed as well as giving him free access if he wants it. Increasing sodium creates more want to drink. Good electrolytes should do the same. Just like you eating chips/peanuts/popcorn. You could also add some mineral oil if he will eat it. It goes through them and isn't absorbed so shouldn't effect his weight. A bran mash is easy. Warm water and bran mixed together until it's a little sloppy. You can add salt, chopped up apples or anything else tasty but normally they love it plain too. Maybe start with a cup before it's wet?

I am always worrying about their weight. Are they too skinny? Are they too fat? Should I change something? Add something to their diet? It’s hard, but fun, being responsible for these little guys, we always want what is best for them. Every time I go to the vet I always ask how their weight is. I was very pleased when the vet said his weight looks good.

Little Thunder is doing great this morning, no signs of colic and he is a little pooping machine again. I am going to leave him in his stall today so I can monitor him but he wants to break out to go boss Stormy and Breezy around

I have had one horse that coliced. I noticed it when the weather changed. I put him on a PREbiotic and had no more trouble. It works in the hind gut.
The first episode was a vet visit; I had to leave him. A few hours later the vet called and I was asked how I felt about surgery. But a little later the episode worked out and he came home. Someone suggested prebiotic, so I ordered some from the place I get my supplement. The horse seemed to begin an attack a couple more times with weather changes. I gave him banamine when I noticed them, and after a couple of months on the prebiotic, he never had another episode.

Thanks Marsha!! I will definitely research prebiotics. Thats encouraging that he hasn’t had another episode.

and thank goodness he didn’t have to have surgery!
M

Thunder looks very calm for a pony with a tube up his nose! A brave boy.

I like Taz’s tip on warm bran mash. I have done that and the ponies/horses ate it right up. It’s a very easy recipe to throw together and as Taz stated, you can throw in chopped fruit to liven it up.

So happy Thunder is back “in business”. See....horse people are really simple...a little pooping and life is all roses!

I think this might be a stupid question, but do you get the bran from the feed store or the grocery store? Is it specifically made for horses?


Update: I just called my feed store and they have it, woohoo!!
T

Your feed store will probably have big bags but more economical than the small ones at the grocery store. It's all the same but if you get the big bags watch it doesn't get moldy before you finish it.

I just put loose human table salt (non-iodized since his ration balancer already has iodine) in Rowan's bucket and he licks it right up with the rest of his stuff (he is not at ALL picky though). My big horses, I used to give them a wet mash made of hay pellets and beet pulp, plus salt and a mineral supplement. Low sugar, and you can increase or decrease the amount you feed depending on the purpose (i.e. more in winter if some extra calories were needed, just enough to carry the supplements in summer).

Beware of bran mashes if the horse is at all IR or prone to metabolic issues - it contains a lot of starch. If the main idea is to improve drinking then just getting more salt or an electrolyte supplement into him will help (they even have pelleted electrolytes now if he's fussy about eating powders).

I've been top dressing with salt for many years. Dapper Dan usually has little dry balls; the vet suggested top dressing salt. I use the pink himalyan salt. I am a poop police, checking mine every day to make sure all is well. Right now I'm seeing a lot of mesquite seeds. They sure love those pods--which is bad because they are high in sugar. I've heard of horses colicing from eating them due to the fiber, but so far mine have been eating them for years with no ill effect.

Hi Kelly,
So glad Thunder is doing good. It is so scary. When I first got my Hershey he colic . I live on a dirt lot, no grass, in the desert, so sand was the issue. I now give both horses a cup of bran 2x a week. I mix in a little bit of mineral oil and water so it nice and moist and they love it. Some horses don't like mineral oil. Since you have not fed bran, I wouldn't add the oil to start. Once you know they love the bran I would add a little oil and see if they will still eat it. Then work up to the amount of oil . I use about 2 tablespoons. I only use warm water in the winter. I buy 50# bag at the feed store and it lasts me a very long time. I hope this helps.

Ive been researching bran mash and I think I am going to hold off on changing up his diet. I think he is sensitive to change and it might not be good for him if I only give it once or twice a week. I think I need to keep his diet as consistent as possible.

Bran Mashes for Horses: When, Why and How? - Kentucky Equine Research

A bran mash, especially a slushy one, will provide horses with water, and this is beneficial for horses that are not drinking.

I gave him his new electrolytes last night and he gobbled them right up, he was probably starving!! Poor little guy!!

Vet did advise to take him off grass for the months of March, April, August, and Sept.

Opps, I’m looking at his paperwork again and it says: “Spasmodic (gas) Colic”…. So not impaction colic

That's completely different, LOL! Yes, you want to not increase or change his feed quickly at all. So changes in grass spring and fall could be a problem. Extra water is good no matter what

See?? I need a lesson on colic LOL … and the different colics

Marsha, my friends horse ate a ton of those mesquite pods and colic twice, the second time it killed him. Yours must be use to them, he wasn’t poor guy.…new house, new owners, new mesquite pods

I check their poop too, but I don’t know who’s poop belongs to who…whom?… who?… whom?…

Colic is scary no matter what kind. Annie went down once and I couldn't get her up. She got the tube treatment and it hasn't happened since.

I was kind of wondering when you said he pooped on the way over to vet. Still scary!

Here is that prebiotic product that I use. I am out right now but plan to get more when I send in my next order. I hope the link goes to the correct product--never know with copy/paste links.
I know there is danger of those mesquite beans causing colic, though the high sugar is more of a concern right now. I have them confined away from the trees right now. Luckily, the trees are not loaded this year. And hopefully the deer and varmints will come and devour those before my horses go out to that pasture again. There is a tree right by my corral, but I stake the horses out of reach of it for their grazing time.
It is easy to tell which pile belongs to which horse, since I only have two. They are very different.

All Nutrition, Fitness and Supplementation are available.

dynamitespecialty.myvoffice.com
You must log in or register to reply here.

M
Mine with choke and aspirating