we have had our Perlino mare for almost 5 years she was born here and our 2012 Perlino filly was the same cream as her, although she just left to go to her new home last week
Last edited by a moderator: Dec 9, 2012

That is normally the way it is between the two, and a smokey black would normally be even darker. BUT, as with all colors, there are exceptions to the rule.

I think you are just lucky- most horses get filthy dirty at this time of year irrespective of base colour!

Some will tell you that they can tell a Cremello from a Perlino from a Smoky Cream by sight, but, basically, you have to test to tell the difference, anything else is an educated guess.

We had a cremello stallion and a perlino stallion both. the perlino always looked dirty and creamy looking. Our cremello always managed to look the cleanest of all our horses 90% of the time lol. But yep, we could always tell the difference.

In hindsight it is sometimes easy enough to see the difference- if you actually know what they are anyway. What I was pointing out was that you cannot actually identify the difference if you have not had them tested. You can guess, and you can say that an animal looks as if it is one or the other, but you cannot say for sure.

Cremellos are pure white and perlinos will have an orangish tinge to their mane/tail and lower legs. It is easier to see white markings such as socks on a perlino.

Smoky creams are a solid, more "French vanilla" color than cremellos are.

Both of my mares are registered as cremello, but I think one might be smokey cream.

Bonny (I think she might be smokey cream, based on foal pics I saw):

After she foaled this year, we knew she received silver from her dam.

I really don't see much color difference between the two. someday, I might color test.

Here is our "cremello" filly. 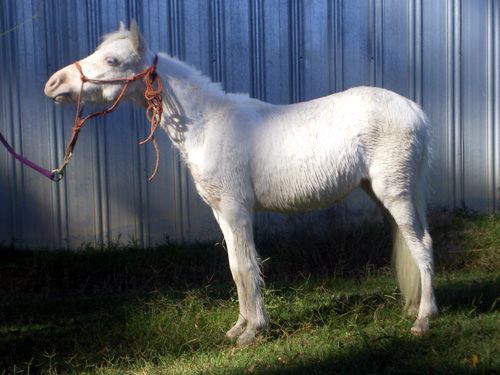 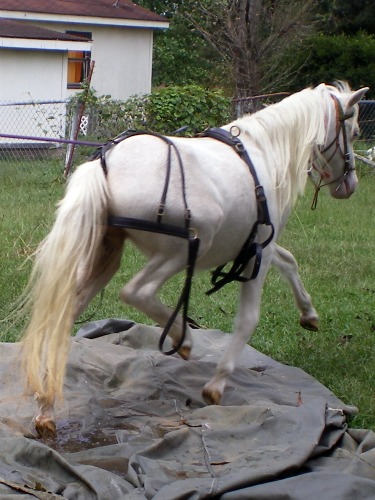 Boy were we caught by surprise when we had her tested.

Paula - I would have said your lovely filly is a perlino due to the darker tail. In my experience cremello's have white white manes and tails.

My Perlino stallion is not tested but he definately has an orange color to his mane/forelock and also his legs. The Cremello POA that used to be the barn I'm at had no points on his legs and his mane and tail were totally white.

ruffian said:
Paula - I would have said your lovely filly is a perlino due to the darker tail. In my experience cremello's have white white manes and tails.
Click to expand...

Reviewing posts and was going to post to the OP, but then realized I'd posted.

i do wear glasses and maybe I don't see the darker shade in her mane and tail that others see. The one problem with that theory Ruffian, (

) is that when her tail is washed (not with bluing which I've never actually used, but with either Dawn, a fungicide shampoo for rain rot or Mane & Tail), it's very white. That "yellow" in her tail is exactly that - yellow with urine. She wets her tail almost every time she goes when it's below her hocks. Smells pretty "good" too, NOT. My male barn cats (recently all 3 were neutered) - love playing with her tail - more so than any other horse or pony we have. I don't pick them up after they've been "in her tail", LOL. I don't wash her tail regularly - which is why I don't just grab and brush it on a regular basis when we groom her. I do warn others that are around that help with grooming or want to pet on her when she's tied or being handled.

Maybe i'm too influenced by all the non-color appreciating neighbors and friends that we have - to all of them - she's just "the white one"...

and to lump it all together all my silver dapples w/ their many beautiful shades are all referred to as "the tan ones" and the gorgeous bays - also of different shades - some solid, some pinto - are "the brown ones".

I worried forever when someone once referred to one of our bay Arab mares as "black" - could not figure out who they were talking about - as I had only one true black pinto pony stallion at that time. Of course, one year that mare "faded out" so much that she appeared to be a "true" dun or sooty buckskin! In the arab world, she is sometimes referred to as a black bay - I've just always called her a dark bay.

I love playing with color and the different things that happen... We'd never even considered that she might be a perlino - until the test came back with one bay gene. Now I have a question - maybe she is a cremello. I now understand that agouti doesn't work on red and that chestnuts can carry agouti and pass it on - but it won't show on the chestnut. SOOOO her test came back as - eeAaCrCr. I'm thinking that that makes her a cremello (carrying the bay gene she can pass on - but not displaying it) not a perlino since she has no black for it to be displayed on...

Me thinks I need to update her page again, LOL!!

paintponylvr said:
Maybe i'm too influenced by all the non-color appreciating neighbors and friends that we have - to all of them - she's just "the white one"...

I always get the albino one

and to lump it all together all my silver dapples w/ their many beautiful shades are all referred to as "the tan ones"
Click to expand...

in summer mine is called the grey one (she just looks dirty grey in winter).
I

SOOOO her test came back as - eeAaCrCr. I'm thinking that that makes her a cremello (carrying the bay gene she can pass on - but not displaying it) not a perlino since she has no black for it to be displayed on...
Click to expand...

Yes, that makes her cremello carrying an agouti gene. so breed her to a black, you could get a buckskin if she passes that agouti on.

We have a cremello miniature stallion and a perlino solid Paint stallion. We can tell the difference in color, when they are clean. Teq(Paint) has a cream tinge to his coat, especially when shed out. His mane and tail are yellowish. Casper(Cremello) is white all the way through.

MMM sometimes that happens, sometimes it does not, luck of the draw, though, not a way to tell the colours apart!