There have been many Christmas Parades in our area - w/i a 50 mile radius. The first one was the weekend before Thanksgiving (too early for me!). We went in our first one yesterday. I drug a pony friend and a mini neighbor along and we also had families involved. It's the first time I've had most of my family in one spot in 2 years with the ponies and the first time in almost 10 years that my hubby has even gone to a "horsey" event! WOW.

Everyone thought I was crazy when I said we needed to arrive 2 hours before the start of the parade. BUT after doing this parade with our daughter's High School JROTC (they had two units - a marching colorguard and a motor pool of 2 or 3 jeeps w/ an adult and two cadets per vehicle), I knew that I wanted time to have ponies and minis worked if necessary, I knew that only two of us would be braiding all 6 equines - forelocks, manes and tails AND I wanted time to relax and sit to breathe and eat the burgers my hubby was nice enough to run into town for. Also, though our oldest daughter arrived to help - she had our 9 month old and just turned 2 yr old granddaughters with her and I ddin't know for sure how that would work. The mini neighbor had his 15 yr old special needs daughter with him and his girl friend was able to care for her while we were getting ready. Thankfully, friend Vicki had not only her hubby but also her two older granddaughters with her - who took turns helping with the babies and decorating the wagons! Our youngest daughter rode with my good friend, Gail - on one of her horses.

None of our beasties were dressed to the "nines" but I have to say they looked good and we had just enough "bell-age" to sound festive and good. The temps started in the upper 60's and hit lower 70's (for the first time in years!) and in a tank top, I sweated while getting ponies ready. I'm soooo glad that I put my "Christmasy" sweatshirt on for the actual parade though - as it turned cool very quickly when it hit 4 pm as we ended the parade and fell into a "quickstep" the back way of town back to where all the horse trailers were parked.

Our ponies all did very well and we all had a ball! I don't have all the pictures done yet - have attached a couple and here's a link to the photo album. 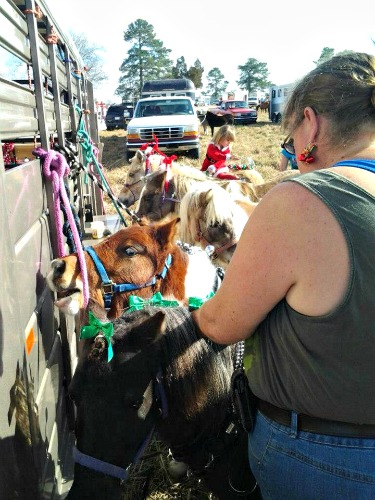 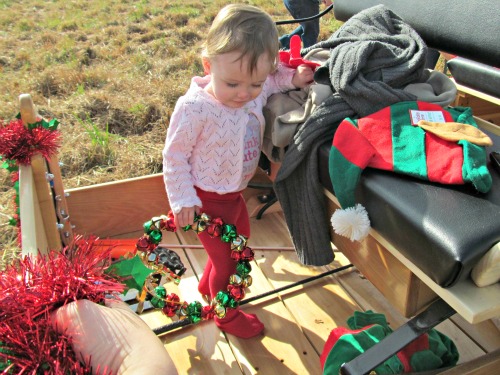 8 month old Gwen is helping... The bells will be attached to the hip spiders on my team of mares. 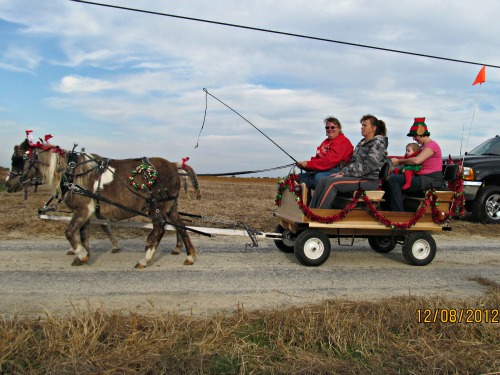 We had a great time. My two year old granddaughter "rode" for a good portion of our 2 hour preparation and then she "drove" the ponies both while sitting in my lap and while standing between my legs for a bit. Our 3 sets of pairs did AWESOME - none bothered by the crowds at at the end of the parade route or the noise of all the equipment that was ahead of us (all the horses - quite a number of them - were at the back of the parade after 175 entries.

So cool to have this be such a family event!!! The horses look really cute with all their ribbons.

Love it..I always like your pictures Paula..And your granddaughter is following in your footsteps.She is adorable.

For the first year of the older granddaughters' life - she would scream bloody murder if taken anywhere near any size of equine. It was sooooo disappointing at first. Now, I'm happy to say that she's enjoying it too. 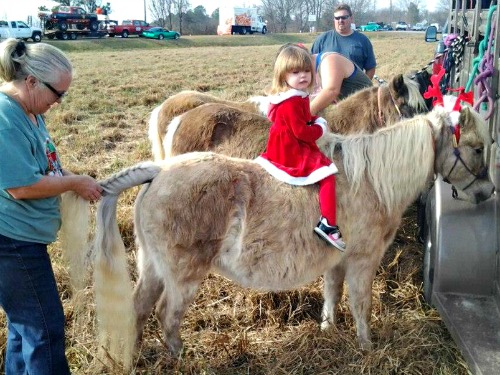 I am looking forward to fitting her with a helmet later this month (for Christmas) so that she can start doing leadline stuff. All thru the parade, their momma, Skye, sat behind me and told the girls that w/i 5 years they would have a small place of about 2 acres where they could keep a horse & pony or two...

Thank you for the compliment on my photos! What an uplifting sentiment - I love it too.
Last edited by a moderator: Dec 10, 2012
You must log in or register to reply here.

C
Feeding a pregnant mare? And other first timer questions