! I used to wear cowboy boots all the time before the arthritis warped my feet. I had like 18 pair. Showmanship is my fav class cause I can wear my hat .

Dapper Dan and I did a parade today. It was a very nice one! Lots of entries and hundreds of spectators.
I had thought of taking Midnight, so as to give her more experience, but she has been rather silly lately, so I took Dapper Dan. I cleaned him with the air compressor, washed and braided his tail, trimmed his whiskers, and washed his boots. He knew something was up and was very interested in the whole thing. He enjoyed being clean, I think.
With the parade having an autumn theme instead of patriotic, I had to go with my non-glitzy outfits. A little western. The hat is actually a Stetson.
Dapper Dan was perfect. My only problem was candy-grabbing. He did manage to get one piece and crunch it up before I could get out of the cart. Wrapping and all. Lots of stopping for children to pet him.
After the parade, we went back to the square and mingled with all the people. The horses were very welcome.
My sister brought Jackie O--I didn't get a picture of her this time. Munchkin came as a fireman and his owner as a dalmation. The picture of them was taken before we got the fire hat secured to the halter with zip ties. And she had a red dog collar around her neck. She threw candy from the fireman's boot.
A fun thing happened. A friend came up with her daughter; it was the same girl who had ridden Dapper Dan when she was five years old. I wanted a child who wasn't afraid to teach him to accept someone on his back. She had written a thank you note after being with Dapper Dan. I told her I still had the note! A grown up young woman now, expecting a baby!
A little breezy but overall a nice fall day. 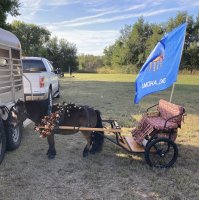 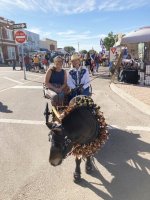 My friend drove Annie with us and we ventured out down the main road and down to a side road. Lots of cars passing us on the two lane road! On the side road there were a few loose dogs that were pretty chill, and some Halloween decor around at the main entrances to people's properties.
Some had ghosts and skeletons hanging from trees. Happy to report Rocko did really well. The neighbor's dogs that chased Annie in the past were barking and jumping on their wire fence as usual. Rocko ignores them but Annie still wants to rush by; especially when they are behind her as she passes them.

They have an HDT at the horse park here in October where they do all kinds of decorations and they have a huge full size horse skeleton that they move around and put in the cones course. It had a harness on it too. Driven to death I guess! Some of the horses spook and won't go near it, but most ignore it. The day before the event starts they do allow people to walk their horse in there to check it out, but I don't think everyone does it.
C

Found the pictures Marsha! He looking Dapper as usual! I love the seat cover on your cart, I bet you made that. It's nice that your friends daughter visited, maybe when her baby is old enough he/she can have their first ride on DD.

He was moving out so nice today! We are working on keeping that lengthened trot. When I get him going he breaks into a canter if I release my contact the teeny tiniest bit. I'm going to put the whip in the holder for now and continue working on keeping him moving out by maintaining steady contact and then add the whip back in and see how we do. He is moving so much nicer at the canter though now that he has gained strength. No more leaping like a rabbit!
It is so amazing how they pick up on the slightest things. He was super responsive today and any missed cues would be completely on me!

I know I've mentioned before that our main road is a two lane road with no shoulders and ditches along both sides. Why the speed limit is 55 is something I don't get and everyone drives 60-65 on it. If I am traveling 55 they go around me.

So when we go down our private (shared road) in the cart we stop and look both ways and when everything is clear I trot Rocko in the direction traffic should go down to the next street and if we are lucky no cars come up on us, but if they do they go around us on the other side, and some are considerate and slow down and others just blow by. Both Annie and Rocko are handling the traffic well now. So today my husband and I decided to go down the main road after driving around our property. Rocko and I go first to pass the neighbor's dogs to give Annie confidence as she follows. We get out to the main road and most of the homes are set back and have pastures in the front. Well some new dogs we had never seen in front of one of the homes came barking and tearing out to their fence and Rocko spooked and wasn't going to go towards the dogs and tried to turn around which I wasn't going to let him do, but now we are in the middle of the street crossways and here comes a car barreling down the road straight towards us! I was trying to remain calm so I could get him to move. All I had time to do was get in the opposite lane since we were facing that way and Annie was on the other side. I can't believe the driver just blew between the two horses never slowing down! Of course afterwards my heart was in my throat but Rocko was over it in a second! He didn't bat an eye on the way home when the dogs charged the fence again which was really good. I just wish my adrenaline rush would be over as quick as his!

Terrifying! I am way too chicken to ever drive on a paved road, I think.

I used to ride my Arabian down the roads (dirt roads, but people went 60+) when I lived in Michigan and while he was completely unafraid of any motorized vehicle, up to and including giant combines that I could have ridden him under, I always had a worry in the back of my mind that he was going to kill us both by spooking at a rock on the side of the road and jumping in front of a gravel truck.

Sounds like you handled it well though and he got over it super fast! But maybe you need a visit over on the "whiskey or wine" thread!

HOLY CRAP!! That is so scary!! I am so glad everything turned out ok!!! Geeez people can be sooooo rude…. they didn’t even slow down for you… geeeez

Had two nice drives with Peanut this weekend, the weather was gorgeous. I put him back in his half cheek jointed snaffle as I didn't have another mullen for my "spotted" bridle and what a difference! He is so much lighter. My instructor hated him in the snaffle as she said it made him "too light" and she was afraid he'd go up and I do agree it could get him hoppy in the front end

if he got excited and I hauled on him, but for driving in my field it's AWESOME. So much less diving for grass and goofing around . Much better for my arthritis. Better for him too as I'm not arguing with him.

My sister came out to drive with me today. Yay! I feel so much more comfortable having someone along with me when I take Midnight out. She acted like a little pro; not sure why I feel that little edge.
We had been trotting for just a little bit and I looked back just in time to see Dapper Dan fall. He kind of went sideways. My sister was in the sulky with him. He stood right up and was fine. We looked him over and tried to figure out why he fell. We were on the paved road and it looked to me as though his foot slipped. So the only thing we could think of was the boots are losing their tread. What do you think? Time for new boots? I was expecting them to fall to pieces with wear, not lose their grip.
Went on with our drive. Through a pasture and on a dirt road. No more problems. When we left the road to go into the pasture, the horses had to go through a ditch with grass taller than them. I went first with Midnight; she just plowed on through. Dapper Dan took a little longer as he had to snatch some convenient grasses.
So do you think the boot has lost its tread? All four look like this. 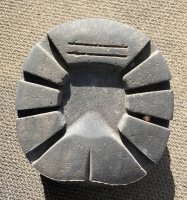 It looks fine to me - but could there have maybe been some loose small stones/large sand on top of the pavement or something? That can be really slippery.
C

They look ok to me, too. I wonder like Abby if he stepped on a rock and it "rolled" causing him to slip. Hope he's OK.

He seems fine. He did get a little nick on his lip. But no skinned knees. I will watch him for a day or two. Maybe give him a dose of equiox. Guess I won't worry about the boots.

Horses trip and fall all the time. Boot looks good to me too. Wouldn’t worry too much about it unless it keeps happening consistently.

He was galloping around like a colt today so i guess it didn't hurt him. Cool weather sure makes them frisky.

Hubby captured this pic of me & Stormy ystrdy before the rain pushed in, it is suppose to be another rainy day today 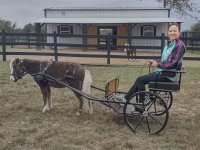 Kelly said:
Hubby captured this pic of me & Stormy ystrdy before the rain pushed in, it is suppose to be another rainy day today

Very nice, with the fantastic barn in the background, too!

My friend came and drove Annie with us today.
One of my other converts called me yesterday (the one who just started driving her pony) and said she invited one of her riding partners over to drive her pony and now that woman has gone and purchased a well trained driving mini for herself!!!
She did not find the mini locally, but on Facebook. She is completely new to driving and is in the process of getting cart and harness. I am thrilled! We may get a nice driving group here.
Tomorrow there is an HDT. I mentioned on a previous post how they decorate for this Fall event. It was supposed to be last weekend but the horse park was underwater after that record breaking rain we had.
Probably didn't have to fill the water hazzard this time!

My husband drove Annie with us and we drove until the sun was going down. It has been wet and foggy so the sun didn't come out until late today!
Annie checking out the cows. Both horses are so fluffy!

I love fluffy. It adds to their cuteness