Yesterday Zorro and Sky had their body work done. Zorro has this done regularly but Sky hasn't had it done since last summer. Since I wasn't using her very much I didn't feel she needed it... BUT she REALLY did! Of course, since then, she has done a few things that really did a number on her body. She is a very anxious, worried pony and has run around and run into a few things over the last few months, resulting her falling down. Poor thing. But it turns out that if one of their hind end muscles is tight and tense and "stuck" it can effect their mental health, making them more spooky and worried. ( I can't remember which muscle my equine body worker said and can't find it in my Horse Anatomy for Performance book!) This must be true because today Sky is like a different pony. She is calmer and more relaxed. She was very happy to see me this morning and wanted me to give her a few scratches, which she has not been asking for.

**I will also add that I have been doing the Waterhole Ritual with her for the last 4 days. This particular one that I am doing requires me to take a chair out to her area, remove Zorro and then sit with her while she has a small hay snack. Then I allow her to come hang with me if she wants or to simply ignore me. Mostly she wants to hang with me and the other day she wanted me to scratch all her itchies AND groom her, which she normally does not like. I am really enjoying our time together. Mostly I sit and watch her eat and read a book. It's very relaxing for both of us. I decided it was time to re-build our relationship, starting from scratch.

Zorro always needs quite a bit of work. There are times when Heidi says she had to spend more time on him than she does on some of the big horses! He has some posture issues and conformation issues, that can cause him to not use his body properly. This is one reason I am such a stickler for doing TONS of long lining. I am working hard to help he use his body correctly. Let me just say, this time Heidi really noticed that he is using his body well and filling out beautifully! I'm so proud of him. Over and over she said he is such a special pony. So sweet and kind.

While she was working on his hind end there were a few times he asked me to stretch his front leg. I never touch him while she is working on him as that will effect what she is doing, so I asked if it was alright to stretch his leg for him and she said yes! So he would lean and lean into the stretch. One time his knee popped! Another time the stretching helped his hind end release. Pretty awesome.

I told the body worker about the tension release with the bit that we have been doing for the last week and she was very impressed with what it has been doing for Zorro's body. It was a very fun morning which ran into early afternoon. She ended up being here for 4 hours! (we did a lot of visiting as well as working on the ponies. LOL!)

Here are some photos of Zorro yawning. He does not release with a yawn very often. He just keeps his jaw very tense most of the time. Since I have started the tension release with the bit he has started yawning! A soft tongue and poll is VERY important for a driving pony. 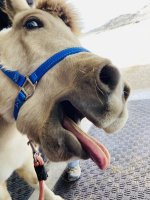 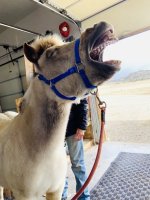 I do the waterhole ritual too! Peanut became much less defensive after we inititated this. He will even "share" his hay if he is feeling generous.
Those are quite a release Zorro had! My mare would yawn like that if I did a TMJ relase on her. Then she'd sleep

Very satisfying day! The two I have who do body work are not that relaxed.
I like to sit with Midnight sometimes, too, without that bossy Dapper Dan around. She is always looking to see if he is going to come up and nip. Thanks for reminding me I need to do that more often.

What a lovely write up! I’ve had Coady body balanced and he moves so much better afterwards. He wasn’t a huge fan of the process but he did very well. (My riding horse was another story...let’s just say he’s...unique. Sweet boy but very strange lol!) Very interesting about that muscle causing stress. I’m so glad that being adjusted helped Sky so much! I need to look into this waterhole ritual...sounds very relaxing for human and pony alike! I’m glad that you got a good report on all the work you’ve been doing with Zorro. It’s always exciting when someone else can see the improvement in them. I love Zorro’s yawn pictures! A great release and he looks adorable in the process!
You must log in or register to reply here.

Apaché finally has a friend!