Our New Mini's - The Beginning

About a month ago my wife and I were approached to help a woman who became very ill and could no longer care for her mini's and was unable to find another person to take them.

We raise a dairy line of goats and had no experience in horse's. We talked about it and went on line to make sure we could care for them and train them, After a whole ton of info and you tube video's we decided we had the room and were willing to take the mini's into our home and herd.

We received a mother and daughter pair of mini's. The mother is named "Misty" 6 years old & the daughter is named "Rainey 3 years old" 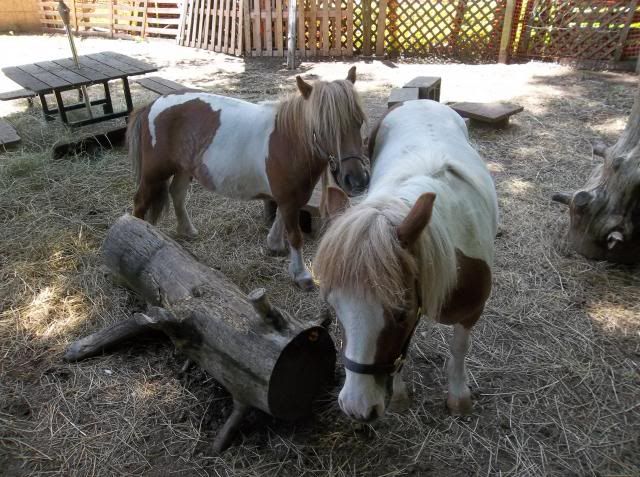 We were told that the pair have not been worked with for over a year. The mini's looked sound and healthy. They received all their shots except coggins & rabies.

Once home we noticed a bite mark on one of the mares legs which healed. We also discovered they haven't seen a farrier for over a year as well. We're trying to find a good and patient farrier who works with mini's. They also need bathing, grooming and manes and tails brushed.

I did find out that the mother was good on cross ties. Once we have that installed we'll find out for sure. The daughter was a brat and tried to nip, but since working with them their attitude seemed to switch, Now the mother is somewhat stand offish and the daughter is a little easier to deal with.

We're also going to have a vet stop over to check them out and give them the shots they are missing.

We both continue to research and view videos on the best way to rehabilitate them. We also had a friend of ours that has mini's stop by and check them out. Her decision was that it would be a long road to bring them around as long as they are together. The mother and daughter have never been apart.

With the new beginnings our adventure into training mini's continues.

I can give you information and history on these girls, I'm glad to see that are still together, but very sad to see they needed to be rescued. Thank-you for taking them in. This is them from May 2011. I would be more than happy to help with any questions you might have, I could give you some names of farriers, I am not sure what part of Maine you are in?

WOW! They look great. The girls now live in Wells, Maine so we're not too far from you. We are closer to Sanford and North Berwick.

When we got them in Rainey was a little brat (she still is and knows how to break out of fences). Now the roles seem to be reversed a little with Misty being stand offish and Rainey being a little more easy to handle.

I had a call/email/posting in to Healthy Herds farrier but still haven't heard from her after her first email that she could help. Now nothing. So a friend of ours, Lynn Baker of "Little Brook Farm" gave us the name of another farrier, Paul Best and I left a message today on his phone hoping to hear from him.

Welcome to the mini world!!! I"m in NH, if you are near Berwick, I"m about 3 hrs away, not much help in location but if you need anything let me know!!! Val

Thanks so much for the nice welcoming post Val and your email Amy, it was a real eye opener.

Rainey: The Daughter, think she looks a little fat?

They look familiar. I wonder if I saw them on the forum before. Im glad you got them. Sorry to hear about the situation. Keep the updates coming.

Location
To your left

In your current photos, they appear to have hay bellies more than being fat, although they do look a bit chunky. From the earlier photos posted, they look like they put on weight quite easily -- some minis are air ferns! I would suggest beginning a regular exercise routine, beginning with short, easy walks every day. Don't overdo it, but take it slow and steady. Miniature horses make great walking and even jogging companions. My motto is feed them up and exercise them down -- rather than reducing their feed, get them moving. You could set up a round pen to work them, but I always find that I benefit greatly when I exercise along with my horses!

I'm inclined to agree with Rainey having a hay belly. I have a big alpine goat who develops a hay belly over winter and usually takes him almost all summer to lose it.

We were able to procure the services of a good and patient farrier who came over and did their hooves. Rainey though gave us some trouble and we were only able to do the front hooves. We're going to work on her back side and the farrier will be back soon to try again. I did like him for his patience and not wanting to stress the girls.

A couple of newer photos taken today of Rainey and her belly area.

Location
To your left

After reading your last post, I'd add to check with your farrier and/or vet before exercising them to be certain they're ready for it.
Pretty girls!

After your posting Susanne you may not agree with this but the farrier suggested to drop both girls down to 2 flakes of hay per day, keep handling them especially their hooves, legs and backs to get them more used to handling. He has a herd of 10+ mini's and that's what he feeds.

Just wanted to wish you all the best with your new additions and a BIG welcome to the forum from Australia.

Just wanted to wish you all the best with your new additions and a BIG welcome to the forum from Australia.

Thanks for the welcome and I used to have a very good friend in Sidney. We conversed every day about reptiles.

One of them looks pregnant to me. Any chance of that?

That was the farrier's first impression too. But I checked with the past owner about her being with a stallion and she was emphatic that she has not been with a stallion.

Makes you wonder though, doesn't it.

bob
You must log in or register to reply here.

Sad day for us