Capriole said:
I put some hay in the feed pan and pulled it closer to me....and he pulled it back

That ^^^^^^^^^^ is proof positive that he's feeling safer around you. He wouldn't have done it if he thought there'd be repercussions.

Between him doing that, peeking at you, and always being inquisitive at the door (I just wanted to smooshie smoosh smooth his cheeks in that looking up pic!) I believe you'll be making quick progress now.

I've always loved the sweet energy coming from him!! He's a great example of why I'm thinking my next equine will be a mule.

It took me three days, trying different ways before I was finally able to catch Kazoo. I almost caught him the very first time, but he shook it off.....then he was on to my evil plan

Friday I caught him the first time I tried....managed to get a rope on his halter (a very lightweight thin rope, because I couldn't get anywhere near him with a regular lead rope.....he knew exactly what that was).....then Saturday he had broken the rope, and only had about 15" hanging from his halter (it had been about 5 ft....started longer but I kept cutting it shorter....I was worried about him getting it coiled around his leg or something).
So, I'll have to try again tomorrow....decided to give him (and me

) the weekend off.
On the plus side, while he was running around trying to avoid me he had ropes over his neck, his back, around his butt, between his legs and none of it phased him at all.
I was able to rub his forehead a few times on Friday. 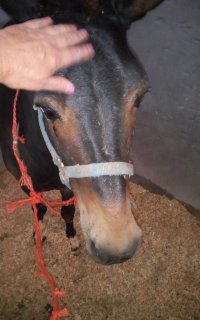 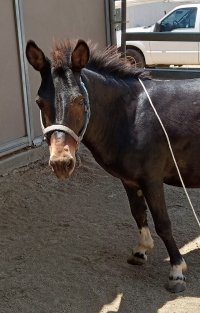 Yay! Good job! Maybe now you can catch him rub his forehead and release right away each day until it's no big deal. You two are on your way!!!
M

Way to go Capriole! That is huge! I think your patient approach is building a solid foundation for the long term.

If mini mules are like donkeys they have a life span of up to 40 years or more. Think of the adventures!

How exciting. He is on his way to coming around to you

Does he hold his breath when you get really close to him? It seems like it in the rubbing forehead picture. These pictures also show him much more worried and tense than in your other pictures.

I wonder how you could give him choices? Like you do with dogs..."This toy or that one. Go left or right while on this walk." Somehow, I get the impression that not having a choice is a very big concern for him.

Oh yeah Silver City, at this point he wouldn’t get a choice with me

… maybe later on, but not right now.

Capriole that is AWESOME! Great job! Keep up the good work!

My vote is to keep forcing yourself upon him to continue to make big strides. He will eventually get use to your wicked ways

Lots of scratches and lots of treats, extending the time you have with him everyday. He will be puddy in your hands in no time

Thank you everyone!
I managed to get another rope on his halter....this one has a 192 lb safe loading weight ( I think that's how the packaging worded it) so, hopefully he won't break this one.
He is definitely more worried and stressed, and really wary of me now

....I feel bad, but I don't think we would have gotten anywhere going the way we were....I'm thinking I may back off a little bit since we aren't going to make this farrier visit (he called and said he's coming this Thursday...earlier than expected....but, I don't think an extra week or two was going to make a difference anyway) I'll ask him his opinion on how much longer Kazoo can go before we HAVE to have him trimmed.

I wondered about giving him a choice....like if I should just back off when he doesn't want me to touch him...well, he never WANTS me to touch him, but most of the time he'll let me...at least for a few seconds....but, today he did back up and try to walk away. I gave him a few seconds then tried again until he let me, then I let him go. But, I was wondering if maybe I should back off for a while when he does that...so he knows if he's really not up to it I won't force him...but, then I'm afraid he'll just continue to do that?

So far my plan (such as it is) is to have really short sessions with him, just working on being close to him, scratching his forehead if he seems ok with it , mixed in with being in his stall/turnout but not trying to do anything with him...so he doesn't always expect me to be harassing him.
Poor little guy.....

Well, he broke that rope too...anyway he's pretty much had the week (or so) off since I sprained my knee...between that and the heat I just didn't feel like doing anything.
We decided to let him out for a few hours a day for now. He seems to like it, and I think it's good for both him and Prince...they both get a bit more exercise playing.
Poor Farah feels a bit left out I think...she's still being colossal bitch to Kazoo...but, I think once I can take Prince out for walks again she may bond with him. That may not be until the weather cools down a bit, though...

I just missed them both rearing while they were playing ....stupid camera delay! 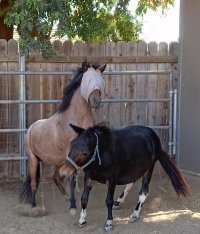 Capriole said:
Saw an ad for a project mini mule. I was under the impression he was gelded, but when I spoke to the owner she said he wasn't. So we would definitely have to have him gelded ASAP....but he's around 7 years old...and just reading at the American Donkey and Mule Society site it recommended gelding before 2 years.
The current owner bought him from an auction a month or so ago as a companion for her miniature horse, but he turned out to be too rowdy for her mini that has stringhalt.
Apparently he needs quite a bit of work....she said it seems like he's been manhandled, has trust issues. Doesn't lead (she keeps a 10' line on him). She said he's gentle hasn't shown any aggression to her dog, horses, loves her kids hanging out with him.
I'm not concerned about needing work, both Prince (pony) and Farah (Arab mare) had trust issues ...but I am a bit concerned that he isn't gelded. . We would have to keep him stalled until he was gelded and then most likely up to a month after.....I know every animal is an individual, and you really can't predict how they are going to be after gelding.....I would imagine if he's ok with horses now he would at least be the same after gelding, if not better....but, I've heard they are stronger than horses and can be pretty vicious, so......
Anyway, we will probably go see him tomorrow (unless we decide not to even take the chance.....I left a message for the vet asking how soon she would be able to geld him...that may make a difference).
Opinions/advice would be most appreciated

Hi, I have had some experience with gelding "senior" ponies, the biggest issue is usually the anaesthetic (probably spelt it wrong) so if your vet can just sedate, and do him upright, better for your mule. We found it took a while for those hormones to settle (apparently, can take up to six months) but, you definitely dont
want him in a stable post-op, he needs to move & you may find that being a bit sore helps with the "rowdy" behaviour. Other than that it is mainly due to personality, so if he's fine with other animals, it should not be an issue. I will be gelding two (dare I use the word) shetland stallions, they are destined for harness, and these boys are 11 & 12. I dont anticipate any issues, and hope to run them together as soon as a month or six weeks post -op. Good luck.
You must log in or register to reply here.

Exercising the young ones