His name is Kazoo...former owner named him that.... doesn't really know why

I've heard some mules can be more like donkeys and some more like horses....from what I saw he acted like a scared horse...a lot like both Farah and Prince acted, but a bit more intense...

Capriole, Today is homecoming! I'm so happy and excited for you to bring him home Send Pics

Thank you!!
Going pretty good so far...everyone seems to be getting along.
Poor Kazoo is a bit stressed...probably not helping when I keep trying to take his picture 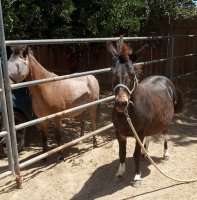 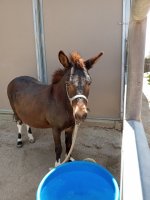 Oh, look at his white legs

He'll settle in. If you spend some time not taking his picture

and just hand around not looking at him it might help. You've gone through this already so know what to do. Take it slower with him (what his donkey side needs) and you'll be able to kiss that adorable face soon.
M

Gosh is he ever CUTE ! He has a friendly and curious expression, I think. He looks like fun!

In the morning I have to give Farah her Prevacox. I give it to her in a handful of hay pellets...so, of course, I have to give Prince some hay pellets as well.
because........this
Two Monkeys Were Paid Unequally: Excerpt from Frans de Waal's TED Talk - YouTube

I gave them the pellets where I knew Kazoo would see, he definitely was watching, so I offered him some. I stuck my hand between the rails and didn't look at him.....he came to within about 2 ft of my hand, stretched his neck out...but, just couldn't quite bring himself to trust me enough to take it out of my hand.....poor, little guy.....but, so close....

That is an awesome video.

Yeah...I feel bad laughing at that video....it's so mean! That poor, little monkey

. I hope they gave her the bowl of grapes after that.


Kazoo checked out the stall today...he had just been staying in the turnout ...I guess he's starting to feel comfortable enough to explore a little...or he decided since I hadn't been eaten going in and out he'd be ok. 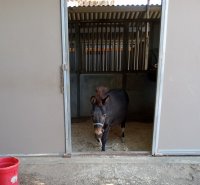 All the firsts are so cool to see! Every little step is rewarding isn't it?!
Thank you for letting us follow his progress!
Kazoo getting settled.

I can’t stop laughing at that video, that’s AWESOME!!

I love his name. He is such a cutie pie!!

They're lucky s/he only threw the cucumber back. I wonder if it escalated to throwing the rock? Did s/he fight with the other monkey? Poor experimental critters.

He has a kind face. Looking forward to following his progress.

Well....we probably took some steps back today.....when I got there Kazoo was out....ended up having to herd him back in ....probably going to hold that against me, but, later I sat with him for a bit and placed a bit of carrot about 15 inches away from me and after a few minutes he did get close enough to eat it.
A bigger problem is when he was out Farah was being so mean to him....at first they were standing kind of close together so I thought everything was ok....but, every time he got within a certain distance she would pin her ears and run him off

. Completely out of character for her...in 8 years I have NEVER seen her show any signs of aggression to anyone. She even went after Prince with her mouth open at one point....I think she was trying to keep them apart (when she went after Prince he was heading in Kazoo's direction)
Prince does seem to be a bit smitten with him.
Poor little Kazoo....I don't know if things will change after she gets to know him better or after he's gelded....I'm hoping maybe she'll bond with him a little when I take Prince for walks....but, I don't know.

She could be protecting her herd, it's very normal. Give them time to get used to each other. As long as she doesn't do more than that I think it will all work out. Poor Kazoo, I just want to hug him and let him know he's going to be ok now.

Tell Kazoo he is much loved on this forum.