I got some pics yesterday of KoKo, then today of Kechi. Got 1 or two pics of GG & Ami. Will get more pics tomorrow of them.

Here's pics of Kechi. I pulled her out of the paddock she's been in for the past week, un-knotted and majorly shortened her mane, cleaned up her tail (she'd had some diarrhea and it was pretty nasty - didn't wash it though because at 50* w/ wind blowing, too cold for me), worked her a bit and then re-introduced her to her old pasture mates. We'd had all of them when I sold her, but the herd dynamics have definitely changed. She and Ami - did some serious kicking at each other...

Can you say "fugly face"?

Hmmm, "GG" isn't small, but now "Flower" makes her look that way... I have to get the stick out and get some current measurements. Another thing to do, Yeah!

Been a while since I've posted about our girls. They are moving along. I'm thinking we should be having 2 foals pretty soon. In fact, based on the looks of their bellies, I'm surprised that their udders aren't a bit fuller. Between how the girls' looked, the upcoming weird weather and my hay guy letting me know that the last load of hay may have had Fescue in it(and the one this week definitely will) - I put in a call to a second vet - for possible emergency back up Domperidone and also to let them have a heads up that we may have foals soon. This will/has become my regular vet, but we haven't had any issues and they have only been out to the farm 2 times and that was last year. I really have been expecting to see a bit more udder development on these two girls. I do understand that being maidens they could go a bit yet and also bring in their milk right before, during or after they foal, but...

Both GG and KoKo will be pulled from their paddock this evening after feeding. They will go into the round pen which currently has grass in it, get a mix of coastal small squares and alfalfa hay and wait until their foals are born... They are both back on a 2x day feed schedule, but may also get an increase - GG has lost some weight on her top line again. Now that she's fully changed over to our feed again, Kechi will start getting increased as with all the running around, she's lost a bit of extra weight she shouldn't have, too.

KoKo - I didn't get a left side shot.

GG. I'm also a little surprised by the edema she is exhibiting towards the front of her lower belly. I've never had that before in a maiden mare this young, but have in older mares that have had many foals. Funny thing is - she doesn't have it so much today... So I'm thinking that's normal or may become normal for her while her foal is developing/right before she has her foal.

After their hoof trims, both KoKo and GG were "galloping" around the paddock. They sure did look "ponderous" and FUNNY!! Just not how I'm used to seeing them move,

Part of the reason that I'm not used to seeing them move that way, is it's been a rather "quick" change for them. I'm used to seeing them as young, rather fast moving jr mares, LOL!! This is the first time in quite a while I've foaled out maidens and it's been quit amusing to deal with them.

Here's Kechi - also a maiden mare and think she's due about June, may go earlier... Didn't get udder shots of her.

UGH - also treating all of the girls' in the Jr pasture for lice. Wondering if it's coming from the trees or the ground here or from my hay? I've never had lice before except once in 2011 after taking 3 ponies somewhere and they picked it up while on the trails(?) and then last spring at this same time after moving here - same pasture/padddock. Does anyone know if I can/should treat my pastures? Or do I just spot treat the mares?
Last edited by a moderator: Apr 10, 2016

Not sure if you can treat pastures, but I'd treat the mares.

I think I have one that needs it, too; she has rubbed herself bald in front of her hips up high.

I knew about worming, forgot to mention it...

Will do a round of treatment with the same powder lice killer I used last year (bought several canisters on Friday - to do repeat treatments). Know that I need to reapply in 7-10 days. So I will worm a 2nd time w/ Ivermectin then as well.

Dianne - then a 3rd worming or both? I think last year I only did 2x... Last year I treated all the mares in two pastures. Looks like I may have to do the boys as well, since I found lice in Ranger's mane yesterday when I took him to a petting function... I was doing touch up on his mane/forelock when I found evidence on him. I was so hoping wouldn't have to do all of them! That's some serious work... LOL.

The ivermectin only kills the sucking lice, not the biting. Here is a good article on lice, how to treat, and how to keep them from re-infecting.

Thanks, guys! I appreciate it.

I really, really hope that this isn't going to become part of my regular "spring maintenance" on/for the ponies! This is one of the few (only one??) things that totally flip me out and also makes me a little sick... Just checking into it has given me the "shakes", twitches and the "want to constantly scratch" at my own head!! I HATE that.

LOL...I think the discussion has that same effect on many of us!

Wow, this is a lot of ponies to do that with... Especially with the time spending on the phone dealing with worrisome issues for my parents Sorry, hadn't updated this section...

GG had a chestnut and WHITE filly this morning. Everything good, great mom for a maiden, some bruising for mom but not bad... Filly pretty strong and upright just a couple of hours after birth. Cute mover, quiet with our granddaughters. GG also was quite happy but alert while we handled her new daughter.

Filly is already named - partially after the weather (WHAT is it DOING???) and partially after a song in a family favorite movie (after all these years) and maybe a fitting tribute as well. Whew - lots to live up to, poor girlie!

Is the suspense killing you yet?

Here is a link to the song/video from Labyrinth -

Big Congratulations! Wow she is such a vivid color! love her and the name.

We knew we could get the chestnut with both parents having been color tested. BUT that amount of white WAS stunning for sure. Guess I got what I asked for a while back - in spades!

May 2015 - (ME) - Since I pretty much know what colors I'm getting from these crosses - I want to put in an order for more white! I'm really hoping that Wizard gives these foals more white - I'm tired of almost all solid colored pintos... Yes, I know it can be a PITA to keep them clean - don't care though. It's been 10 years since we had a foal w/ lots of white. In 2005 - we had 2 foals sired by AJ that were about 85+% white (one out of a bay arab w/ lots of chrome<sabino?> and one out of a minimal sabino black mare) and I'd like another 2 or 3 that way...

Rhythm produced 2 bay tobiano fillies that had lots of white, though, Gel had more than IC. Sioux also produced 5 foals - 4 of whom had massive amounts of white - Shield had the most just like Gel...

It's always fun - when you know you are guaranteed to get pintos - to wonder and then discover how much white there actually is on your foals...

The order was heard and understood!! Now we wait on KoKo and Kechi...
Last edited by a moderator: May 7, 2016

Here's a couple of pics of KoKo. I will get a more balanced set tomorrow. Her udder, even for a maiden, isn't as full as I'd think it should be before foaling. I did get fluid 2nite, but it's still very clear. Needs to go cream/yellow and sticky...

Well, I was going to post the new pics from yesterday, to include udder shots.

Told the girls that KoKo would foal this weekend. We moved Kechi into the round pen w/ the other two,but wasn't expecting a foal from Kechi until June (at least another 2 weeks?)...

Checked last night on them - around midnight we had severe thunderstorm move thru. All OK...

And KoKo's new son IS NOT by Wizard. He is not bay. He would be by Echo...

After the mixups and pony mixing of 2014 & 2015, I'm glad that Kechi's previous owner only had 1 stallion. We know that Kechi's new filly is by Toro. 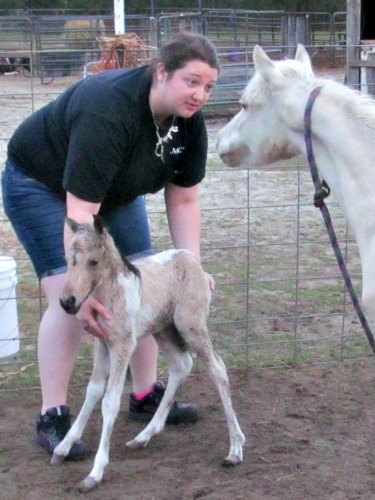 Kechi's little girl has some straightening out to do and we'll get more pics later...

Oh my goodness they are beautiful! Congratulations Paula!!
You must log in or register to reply here.