Riddler is so cute.

Thanx, all! Wow, Kim - hadn't seen you in a while! Hope all is OK with your grand daughter - will be off to read your thread rite quick!

The mares are steadily rockn' and rollin'. Beginning to think they are just looking preggers and will foal in early 2016 - which coincides with when I DID have Wizard turned out with the girls during some fencing issues (easier to just keep him happy for several weeks, then to stress about whether he was in or not). I DO know that I have some other mares (maidens) that look to be coming along with Jan/Feb foals 2016 - for that period when I had Wiz turned out with the 15 mares.

None of those four have started bagging up yet, but their nipples/teats have "spread out". It won't be long before we start getting filling going on. The first day that Wizard was out with them was Jan 25th (about 2 weeks earlier than I'd have preferred, but) thru March 5th... I will start a new thread for them in 2016 -do have some pics... Thinking that with the two that fooled me (Tory & K-La), that we will have 6 foals pretty close together in Dec/January - into February/March. The new ones - Ami, Flower (iffy - 1 day I think yes, next, no), GG & KoKo. Ami, GG & KoKo all had their foals move on Friday when I was holding them for the farrier, so yes, I'd say that now I know they are!! Ami & KoKo are solid silvers - both heterozygous black, GG is 1 gened for black, silver and tobi. Flower is known to be 1 gene for bay, silver & tobi - don't know about black. So all foals will be tobiano. 3 could be chestnut or they will be bay or silver bay. We'll see on Flower's foal.

and this "cold" has changed or I've gotten better for just a few days and then caught something else! ACK! I ache again - all over. Coughing in earnest again - w/ lots of drainage. Taking cough syrup, ibuprofen & psuedofed (the real stuff - regulated from the pharmacy) and using the Chloroseptic throat spray, gargling with salt water and lots of hot coffee/hot water/hot tea! I was freezing yesterday when my hay delivery guys were sweating in tank shirts while dropping round bales in my pastures... I really needed/wanted to be over this before now - have plans for THanksgiving and company coming and it's hard to get things cleaned up when you are miserable and weak. Dog gone it...

Weelllll - FINALLY making progress! Though they may both carry over into 2016.

K-La's udder is about the same size right now that 'Clipse's was when 'Clipse foaled in September. So we shall see. I'm used to my mares' having much larger "bags"...

Due to VERY inclement weather (to include flooding in many areas around us - very glad that we aren't on our previous property!!), I simply haven't done pics. Will try to get pics tomorrow after the morning rush/presents and while I'm feeding ponies IN DAYLIGHT.

and I'm still not over this "cold" completely. Something happens (very humid today and out of the blue, I just was miserable and then started coughing) and it feels like it's right back...

that brought as many smiles for me as the "lude" pose my hubby affected in front of the tree with his pom pooch!

Have to share the "french pose" (as our arty daughter put it).

Here are pics of K-La:

The edema and larger udder - 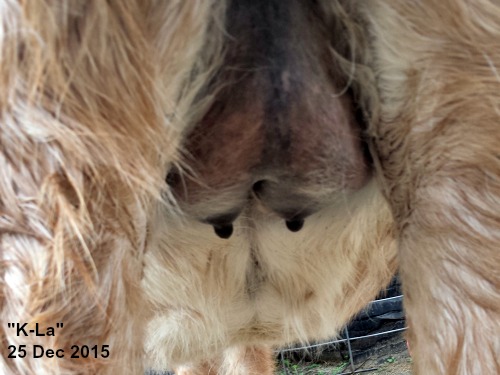 I'll post a couple more side shots in a minute...

The vulva shot above - I want to see it more extended (it looks long in that pic, but it's not), a bit more swollen, "poofy" and "loose". She still freaks out, so looking inside the vaginal canal really isn't happening - though she's finally gotten to a point where she seems to enjoy having her tail brushed out. It's one of the few things she stands still for.

I braided up her tail with a haystring, but may take it back down during the day the rest of this week - FLIES were out in force this afternoon after I put up her tail and I almost took it back down as I felt kinda guilty...

IN the next pic, you can see where the muscling is "dropping off" around her tail head/croup. I THINK we may have a baby by the new year, but I've been so wrong this year...

Just got back in from checking her - no immediate signs of pending birth, no changes from when I took these pics earlier today.
Last edited by a moderator: Dec 25, 2015

Honestly, she looks less pregnant to me now than she did in June! So, she is either pregnant and will eventually foal OR she is having something like "mini" false pregnancies - each time one of the other mares gets close. I've never heard of false pregnancies multiple times per year like she MAY be doing, but wouldn't put it past her.

We shall see. I didn't get udder shots at all and didn't even do up about 10 shots that looked pretty bad (she was ducking and dodging me, and her legs were splayed everywhere, LOL)... But look at that beautiful face!!! I have a couple of ponies whose "faces"/heads just make me heart go pitter patter - Tory's is one!

Getting ready to go check K-La for the 2nd time and go ahead and feed. No baby or signs of impending birth the first time (but have had 2 born this year after I've gotten ready to go out to work or to an appointment, sooooo....).

and between 0630 & 0900 she foaled a TINY filly! Julie came up before I made it out again and let us know - she'd gotten some pics, some vid and said the foal was real "wiggly", she couldn't tell the sex...

Sorry took so long for me to get back up on here - took pics, fed, cleaned water tanks, handled the baby some more, set up feeds for tomorrow, texted a few people including our 2 daughters not here right now. Back into house, lunch, download pics, adjust pics and set up her album in Picasa and WALLA

Here is our CHRISTMAS BABY (don't have a name yet - it'll come)... O, yes, remember I said I would like to have more "color" (white vs dark)? Think the order was understood!!!

Yoshi is Sierra's boyfriend - he spent Christmas with us. This is his first viewing of a newborn baby "horse"... He was afraid to touch her though - not his "thing", hate to tell him but if he remains Sierra's boyfriend, he'll end up getting used to horses overall and doing stuff with them too, probably!

And we'll have to let our "roan expert" tell for sure, but I believe this little girl will clip out or shed out as a bay roan... See the little "goggles" around her eye that is "funny colored"? That's like a grey horse and think I've seen a few roan shetlands with that as well...

Sierra's first comment upon touching the little girl was "OMG - look how "furry" she is!" And "O, how soft" - I didn't get the pic of her rubbing her face in the babies side/neck "fur".... Too busy almost dying of laughter!
Last edited by a moderator: Dec 26, 2015

And, even the day after Christmas, Noelle, might still be fitting as a name, or maybe Holly; if you're into holiday theme names.

- yes, we do Holiday names. "Cupid" & "Shamrock" were both actually foaled after their named for Holidays (I think both were 2 days after, instead of 1).

Throwing around a few right now. Will wait and see what we think tomorrow... Though so far - Larry and I like "Tinsel".

Noelle won't work (though I LIKE IT) - it's a middle name of a classmate of Sierra's and she flat out said "NO"...

I also like Holly but so far no one else does -

We came up with quite a few others - but the only other one I really like is "Elf"... The rest seem more for boys!

I like this one that you listed: LP Painted Wizards Holidaze

Sierra sent me the pics she took w/ her phone - and here are a couple of those now...

Julie holding her (she was AMAZED that she could pick her up!) 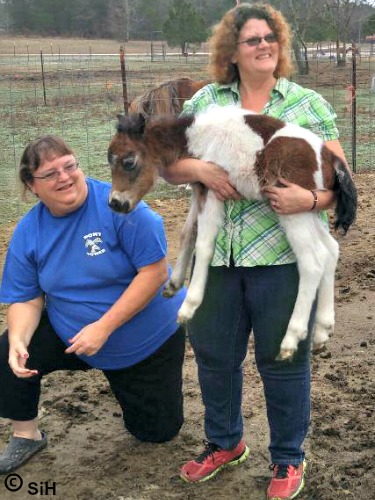 Look at the watchers behind us

Sorry im so late to the party, but certainly happy to return to see this

THANX, Ryan and welcome back!

I think we've decided on "Blitzen" - though not sure how it will work for a registered name yet. She's quite the bouncy little girl! She and Riddler are running back and forth together a lot now. Funny how that works out.

Oh, just precious! I am a little late too. Yes definitely looking soft and cuddly. I was amazed at how soft Annabelle was. I miss it.

Wednesday at 10:41 AM
Standards Equine

E
Miniature mares unable to get into foal

Apaché finally has a friend!