Hey, hey, I've been away

Julie in North Carolina, easing back into things after being gone for....ooohhhh...18 months or so.

Life threw me a real tough curve ball, and I made the difficult decision to rehome my friend Spanky in January of 2019. I placed him with a wonderful family with homeschooled children. My last update from them, in the fall of last year, included pictures of the little girl teaching Spanky. She had her little desk set up by his paddock and was reading to him. He loved it!!

I mourned losing him, as well as some other major losses, on through to this summer. One day in late June, I got a bee in my bonnet to surf Craigslist, ran across an ad for a 3 year old colt, and 2 hours later he arrived here!! His name is Tejano (Tay-HAH-no) which is Spanish for Texan. His name was Tex, because he has that great state on his side. 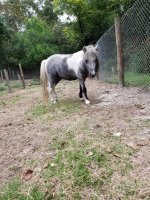 I changed my avatar to him. He's quite the character, as you can see from him bowing. He's a busy body, always poking around and curious. He was kind of naughty when he first got here. He'd rear up and strike if he didn't want to go where you were leading and he was a biter. However, after really having to move his feet a couple of times, he quit THAT nonsense.

He has a PHENOMENAL mind. I mean, just spectacular. He's a lightning quick learner. Curious. Sensible. As an example: his halter is one that you can either buckle over the poll, or slide over his head like a bridle and clip under the throatlatch. I'm on a 2/3 acre micro-farmstead and have cross-fenced 3 paddocks. About a month after arriving, I had him in one of the grazing paddocks. Because he was still learning to be caught, I left his halter on while I was pruning nearby. I noticed him grazing by the chicken pen. After about 10 minutes, he was still in the same spot. "Hmm," I thought, "I must have spilled some chicken feed there." I shrugged and kept on pruning. After another awhile, I glanced up and he was head down in the same spot. "Oh crud, what's wrong?" I muttered to myself, while stumbling down the hill and through the gate to him.

The clip on the side of his halter had caught in a square of the field fence I have the chicken pen separated with. He couldn't lift his head at all. Instead of pulling back, freaking out and fighting--which could have easily cost him an eye--he waited until I helped him.

A couple days ago, I had him picketed in the yard while I was potting up some elephant ear starts a friend gifted me. Looked up to check on him, he was standing hip cooked by the gate. He was relaxed, so I figured he was just napping in the shade. Finished my potting, watered all the plants (it was 80 degrees, after having been in the 60's the week before) and he hadn't moved a stitch. Alarm bells ringing, I hustled over to find that same stupid clip caught on the gate. The scariest part is that I have poultry wire attached to that gate to keep my bantam chicken birdies in, and the clip had that wire within an eyelash distance to his closed eye. Again I thanked the Lord, praised Tejano for being such a good boy, and freed him. I ordered a new halter without a clip throatlatch.

I have mobility challenges, so most days I have to use a walker. Starting this week, Tejano will be introduced to walking with me AND my walker. I recently was able to purchase a Whiteman Harness from Chimacum Tack (thank you Mindy and Jamie! *hug*), so he's beginning his ground driving as well. I have high hopes that he and I will be able to compete at some CDE events at the Carolina Horse Park next year.

So there's a great long introduction for you! I've attached pictures of Tejano. As I get back in to the forum a bit, I'll also tell you about my service dog Monica (Bloodhound mix), Cash the Koolie dog, my bantam chickens and my micro-farmstead and cut flower farm.

Wow, you got a nice one. Maybe you can train him to be a service animal, too. And welcome back.

Congratulations on your new guy. Love his coloring!

Good to hear from you! Looking forward to hearing more of your adventures with Tex. He sounds like a wonderful boy.
M

Hi Julie and welcome from MN!

Tejano is beautiful and sounds like one smart fellow!

Your dog is equally adorable!

Thank you all for your reply, and I beg forgiveness for my tardy acknowledgement.

I'm working on rearranging my ENTIRE life right now. I'd like to go out of 2020, and into 2021, strongly and with a solid plan of action. Part of that is learning how to allocate my online resources time.....posting to forums, updating webpage(s), and learning to start and maintain a YouTube channel. As it is now, I'm thinking I'll be posting once a week. I'll dedicate one entire day to nothing but web-stuff. I believe that will be sufficient time to reply to whatever forums I'm part of, as well as post to my webpage.

If anyone here has been involved with maintaining a YouTube channel, would you share insights?? I'm curious as to one's actual user experiences, both positive and negative. What challenges did you face? What was your learning curve? What did you wish you knew before you started?

Well.......guess I need to start another thread and ask those very same questions! LOL

Also, MaryFlora, whereabouts in MN are you? I lived in Kasson for my last two years of high school, and still have a large family in the St. Paul/Minneapolis area. I miss the summers-----winter, nyeah---not so much.

We live in north central MN not too far from Lake Mille Lacs. I’m not MN born, but married into it.

Winter can be hard but I do enjoy the changing seasons!

Enjoy making plans for all of your fun animal pals!

Mary Flora
You must log in or register to reply here.

G
Buddy? For my mini

Mar 30, 2022
Girlwholovesherhorses
G
G
When to send my mini colt to a trainer? Round pen?

Jun 4, 2022
Girlwholovesherhorses
G
T
Learned a lesson - maybe it can help someone