Hello! I got by Flash online, I’ve been around horses my whole life and have never even met a miniature in person until early 2020, and it happened to be the one I bought. I’m only 19 but I’m still a lifelong horse lover, I’ve only owned one horse previously; a beautiful black arabian gelding called Maverick, I lost him almost exactly two years ago- rest easy. However, I’ve still been riding and working around horses every single day since and a barn mate said her mom had a mini when I said I was interested in them.

Why I got intersted is a bit weird. I have very low self confidence, especially in my riding, but not in my ground work, my trainer is a great person but she never really praised the good things I did, just called out the bad. I didn’t like riding so much anymore and I looked into what else I could do- which is something like driving. A full size horse is a huge responsibility and something I could never keep at home, I’d want them to have at least a full acre of grass to graze on, and my awkwardly shaped property won’t allow that. However a miniature horse, sounded like a great idea and I researched a ton about them and the differences between them and big horses. I also have some issues with my body, physically and mentally, and I thought a small horse would really help with that because my arabian helped me so much but I couldn’t really afford a full size horse at this time and a mini just seemed like a good ESA type animal to have. I have other pets, exotics animals, birds, fish, a bunny and the typical dog and cat; I’m a HUGE animal lover and I’m always up for an animal based challenge. This mini I ended up with happens to be a big one!

They said he was bought from an auction about seven or eight years ago (so there’s no background on him before that) and they’ve kept him at the same place ever since. He’s around 11 years old now, they said he’s “proud-cut” which pretty much means he’s gelded but acts like a stallion. I’m not too sure in the details as that’s how he was when they got him, but I will have a vet look at it eventually, I sure can tell you he’s got nothing down there but his attitude sure is bigger than a warm blood! He’s already put some scars on me, but that’s alright, I’m accident prone anyway, a large rearing and bucking mini won’t stop me from my passions.

He is very overweight though, an eight, pushing a nine, on the Henneke body condition scoring system. He gets tired after hand walking for a few minutes, he hasn’t been worked in a long time, but we are working on it. He’s at a boarding barn currently but will be coming home almost definitely before 2021 and I am very excited for that! He’ll have plenty of room to run around even though it’s not acres and acres of rolling hills, he didn’t have a huge pasture at his old home anyway, it’s only a little smaller than before but he’ll still be working a lot outside of it so he’ll get plenty of exercise.

I’m very happy to properly join the community of miniature horses and I’m excited to see where this will take me! Also, my mini’s name is Shorty, he’s a black and white paint around 38 inches tall! 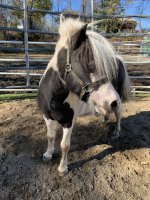 Shorty is beautiful. Your vet can explain "proud-cut" and do a blood test to see if he is producing testosterone. If he is you will need to treat him as a stallion with your training and interactions with him. So please be careful, and get help with him if you need it. I don't want scare you, or even discourage you, but I would rather deal with a stallion than a proud cut gelding. I wish you the best of luck with him.
T

Welcome!! Shorty is gorgeous! It sounds like he's landing in a great home. I would suggest if he rears and kicks with you close enough to be hurt that you teach him not to ever come into your space unless he's being a gentleman. All you have to do is wave your arms, jump up and down, twirl the end of your lead, wave a whip around, anything to make him move away if he's being rude when he's close to you or coming towards you. Be careful though if he's already close to you, take a couple steps back before you tell him 'no'. I have one about the same size who can act study(gelded late) and gets very pushy to the point of biting and turning and kicking if he's in a mood to try it on. I chase him out of my space and then make a point of walking into his front end and making him give way( backwards or sideways) and he turns back into a sweetheart, but it took most of last winter (he moved in in Oct) to get him to the point where I knew he could be a sweetheart. Enjoy the journey with him and please keep us posted on how it's going

Welcome welcome!! I am new to minis too. And I ride Arabians as well!

Nice to meet you! Shorty is a beauty! I’m new to minis, too. We just got 2 weanling minis, Theo and Ziggy who are 5 months old. We’ve had them for almost 2 weeks. I live in Western PA, in Beaver County. I look forward to reading about your adventures with Shorty!

Welcome to you and Shorty! I have a little dog named Shorty so I like your little guy already.

Take care with his training after you let him settle for a few days when you bring him home. I'm sure you already know to be consistant, and firm when you need to, praising him when he does right. By this time next year you will look back and see just how far he has come. You got this! Keep us posted on your progress with this cutie.
You must log in or register to reply here.