Has anyone here used the product?

The company tells me it can be used for miniature horses also.

I have not even heard of it before. Looks interesting though.

I will ask my friend & neighbor that raises goats if she has heard of it. Maybe we could share one!! Thanks so much for posting!!!
Last edited by a moderator: Dec 13, 2012

Thats pretty interesting, i tried the Animark brand and could not get it to work, so i bought a U/S machine that is used internally. I would be intrerested to know who has used it in real life and its sucess rate.

I am just real curious about this because it is quite inexpensive as ultrasounds go and sounds very simple to use.

Lil Hoofbeats, I read up on the Animark and it seemed much more complicated.

I do think this would take a lot of practice to be good with it, but I sure would like to hear from someone who has used it.

Here is a response after contacting them and asking if it works for miniature horses.

Thank you for your interest in our products. The Preg-Tone Series 6 and the Preg-Alert Pro can be used with miniatures. (The deep Probe option isn't required.)

Genie, I've been talking with them too. They are very good to answer questions. I just wish I could find someone with actual experience with the product....even experience with alpacas or sheep...something similar in size to a little horse.

I've tried it. Not exactly the same, but same principle: it detects fluid in the explored area, so the amniotic fluid in the uterus of the pregnant mare. To have a chance to detect pregnancy, the pregnant uterus must have come over the pelvic rim, and so the test is possible and reliable after 3 months of pregnancy. The earliest moment possible for testing is 2 months of pregnancy, but that's not true every time on every mare.... a positive result is indicated by a permanent tone while you hold the probe directed on the uterus.

I've tried the bigger version with bigger probe for cows and horses (normal sized horses) on 2 mini-mares, one pregnant one not: it worked good, the result was right. 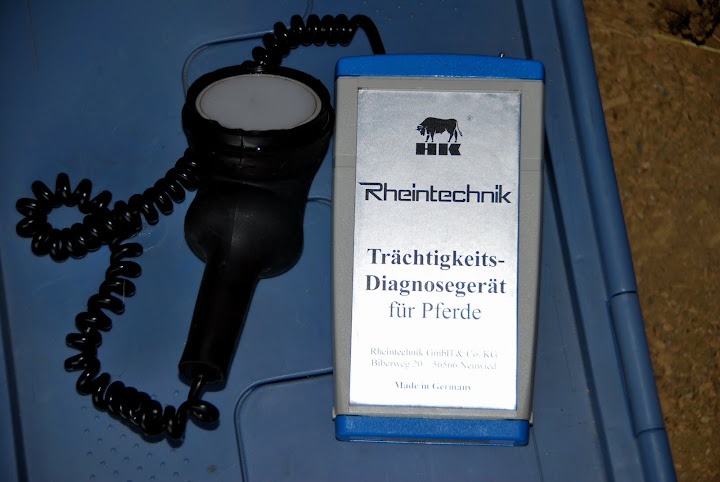 I've also tried the smaller version for pigs and sheep on 3 mini-mares and it works as good as the one with bigger probe. 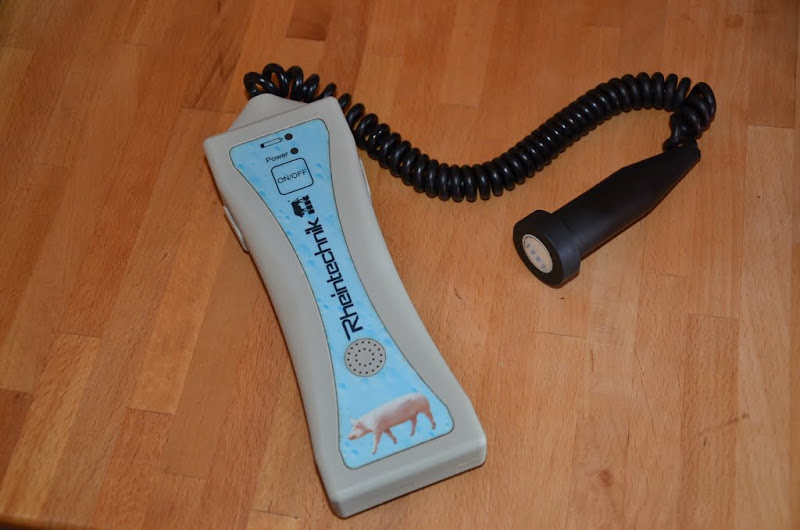 anyway you can have a false positive result if the bladder (yellow) is filled. It's fluid in the same area where the pregnant uterus (pink) should be, so the probe will react as for a pregnancy. 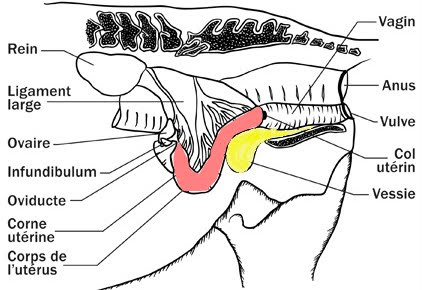 Lil hoofbeats, if you have a US-machine with rectal probe, I think there is no benefit for you to have this rudimentary US-tester. It's quick and easy to handle, you have absolutly no risk, but I think you will have done a rectal US much earlier before testing with the little machine...

I know a breeder of miniature-donkeys with about 20 mares. He has this machine (the bigger one for cows and horses) and is very satisfied of the results. With a little bit experience of where to position the probe, he's able to detect pregnancy from the 2nd month.

wow! hippocampe this is exactly the information I was looking for. I am still considering this as I have some small mares that our very skilled/experienced vet cannot do an internal ultrasound on. And I would really prefer to not do the internal ultrasounds anyway due to the slight risk involved.

Thank you so much for your very detailed reply.

Do you know? Does the long winter coat need to be clipped off in the area where you place the probe?

no, at 3 months of pregnancy the hair is not a problem, because you go very high in the inguinal area between the udder and the inner side of the leg - very close to the udder, where the coat is not so long and deep... just use a generous quantity of US-gel or oil for a good contact between skin and probe.

If you have a possibility for "real" ultrasound, you can do it the same way you would with this little tester, and you would see the foal: the spine, the heart beating, the head; for a "real" ultrasound you would better clip the hair, because even with a lot of gel, hair can give you a bad image. But if the little rudimentary tester can detect a pregnant uterus, a classical US with visualization can it too.

in the later pregnancy (later than 3 months) you could also do an external trans-abdominal scan, but because of the uterus coming down more in the abdomen, you would absolutly need to clip the hair. In later pregnancy the probe is hold on the abdomen in front of the udder and a little bit more on the left or right (depending on the foal's position), and here ist is much more hairy.
Last edited by a moderator: Dec 21, 2012