I am having trouble finding good fly masks. They either don't fit or won't stay on. Any recommendations?

I gave up on purchasing ones and bought the suitability pattern and started making my own. A lot cheaper and more productive in my opinion. I have a collection of expensive and poorly fitting ones in the tack room that do not stay on, or that rub or fell apart. The pattern is easy to follow, adjust and customize. Once I made a few and got the hang of it, they started to go together real fast. I even put fleece lining on the trim, stitched elastic gussets over the nose and cheeks and sewed leather scraps over the velcro tabs to reinforce them.

Pictures Amysue? I went with several that were made for me - but don't know what went wrong. Not one of the several I special ordered fit!

This is one I got from our local feed store - cheap. I bought several for some reason - think it was 3 for $10? At the time, this is the only mare that these fit - but the following year - it fit a couple of the shetland yearlings that I purchased as weanlings in Sep 2009... This mare is 37/38" at the withers and has a rather large/common head. The 2nd pic is also a "cheap" one (more like cheaply made). It did an OK job, but I found very quickly that I'd rather spend more and utilize the two name brand ones I ended up going to (Farnam and Cashel Crusader). I also found that I don't really like them with the ears on them. The ponies rub more with those - tearing the fly masks up and/or pulling the fly mask off and totally defeating the purpose of the fly mask. 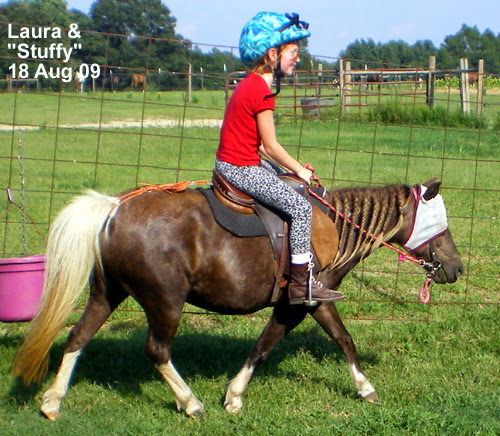 I LOVE the ones from Farnam. The ones that are mini sized (purple on box) fit my 40-45" shetlands and NOT the smaller minis. I've never gotten one of the smaller ones (pink box) that are supposed to fit the A sized minis... I still have some ponies that can/do rub them off - I run the tab under their collars before I velcro it shut. And I don't seem to have any pics of this fly mask on our ponies - though at one time I had at least 5 ponies wearing them at the same time.

I also like the Cashel Crusader masks - usually purchase the foal/mini size, but again these may be too big for the smaller minis since they fit my larger Shetlands. 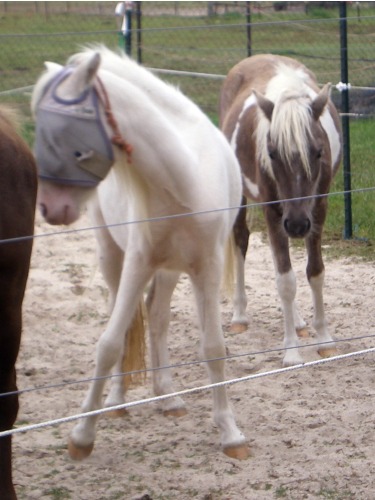 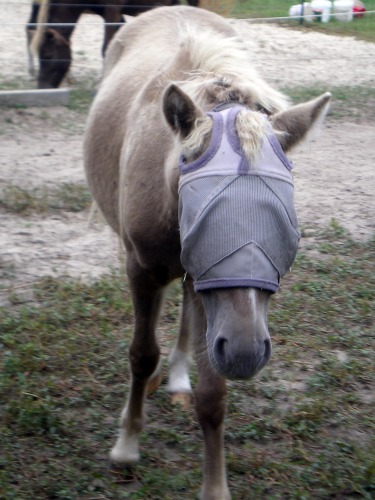 Here is a long nose Crusader mask on 3 yr old Flashi - protected her white nose especially since she'd spent the previous 18 months in a barn while with a show trainer... She was officially last measured at 39" as a Foundation Shetland, I think, as a 2-1/2 yr old right before the 2013 Shetland Congress. 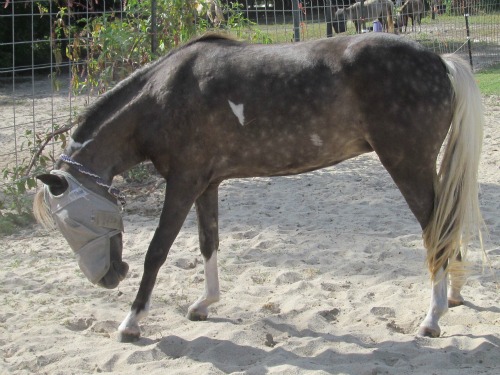 But Ozark Mtn Mini Tack carries them in a mini size. I like Kensington products but have never tried their fly masks - this is one also carried by Ozark

Here is Star Lake Tack's fly masks - I haven't tried these, but I sure do like their other products! I believe they are made in-house.

Here is the one made by Mini Express (in-house sewer)...

Cant remember the brand off the top of my head, will have a look when i get home, but the ones that Ive found the best are the ones that have a thin layer of foam attached to the inner mesh that goes around their ears.

I like kensington. Cashell with ears works too. I would like to know more about the pattern to make one!

I like these the best, they are from Schneiders and come in several sizes too!

I ordered the pattern from suitability right off of their website. I traced the pattern onto newsprint so I could make the flymask in several sizes. I bought the pet mesh window screen at the hardware store and used polar fleece to line the edges. I stitched elastic into the nose and crown to cinch the rounded edges to keep bugs out.