Well we made it back to Canada (they let us back in). We went to the Sanctioned AMHR show in Drayton, Ontario yesterday (Saturday). We got there early in the morning just as the sun was coming up. Weather seemed like it was going to be fine. About a third of the way into the show it rain on and off the rest of the day. That did not deter most of the exhibitors though they went on with the show. Fran did the announcing and I did some of the ring stuff (first time but I guess I did OK

). We had a great time and met some new LB people and put some faces to names. Here are a few shots that I was able to get. Amy got to take a bunch more with here new camera. I do have some others if anyone wants more. 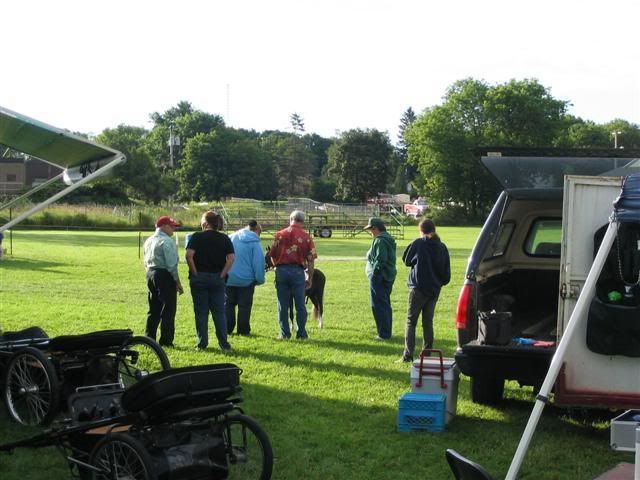 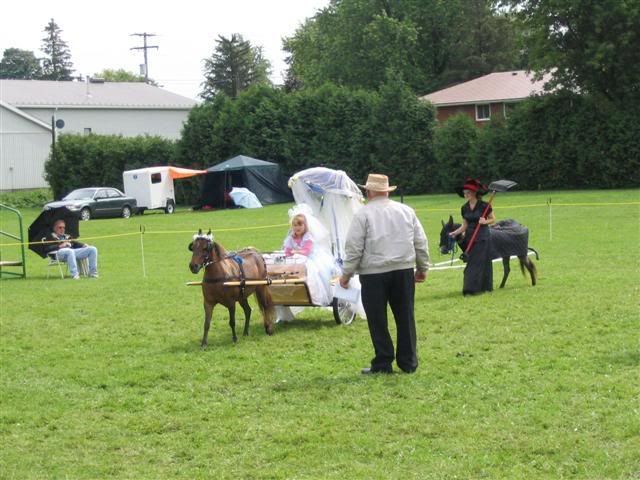 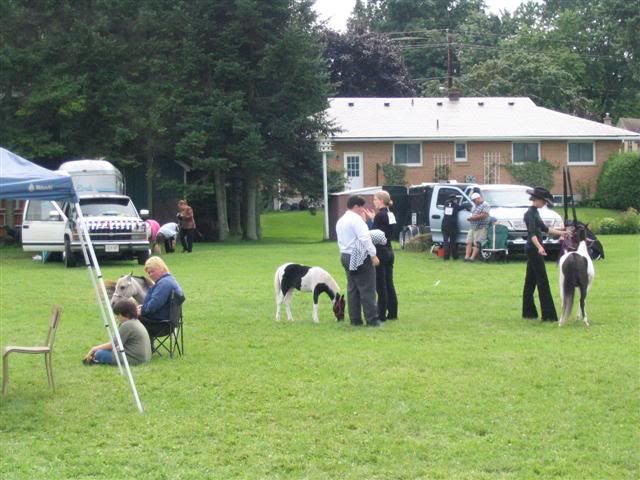 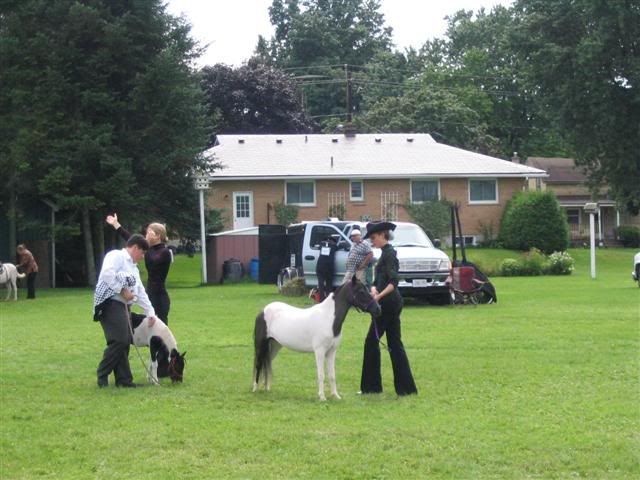 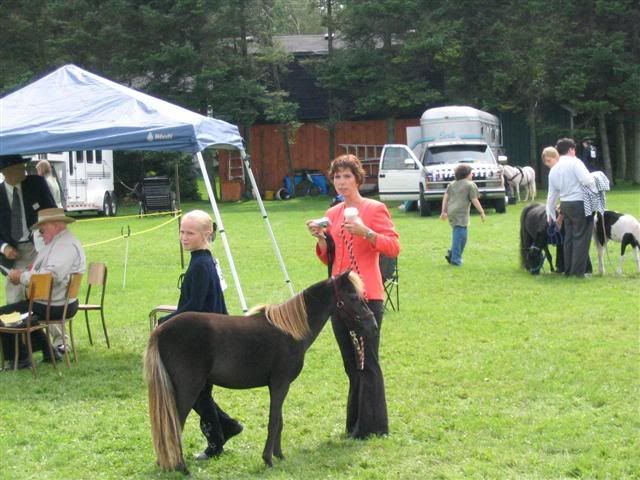 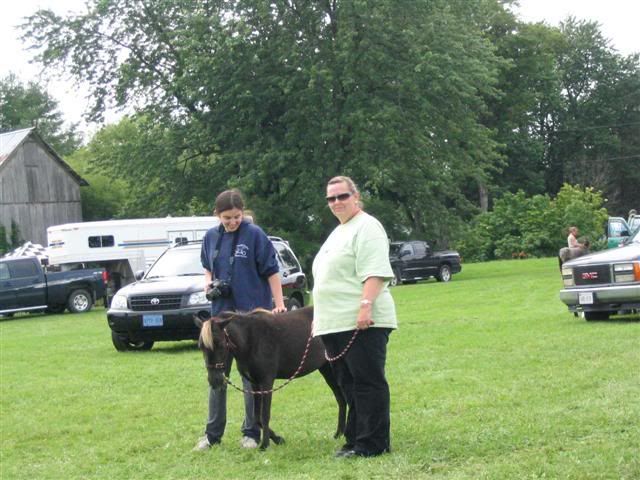 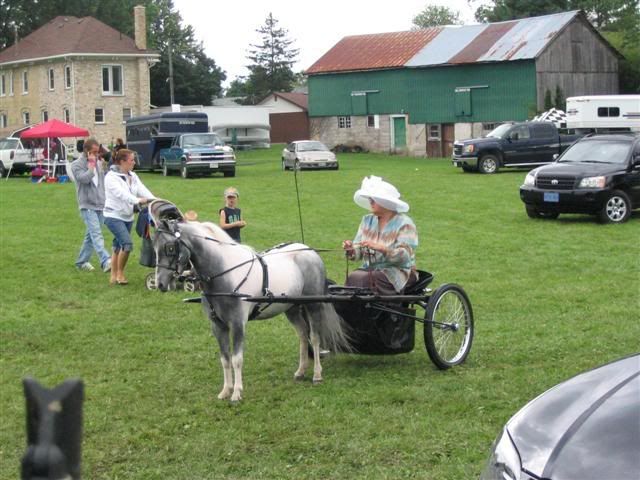 Great pictures Walt. Sounds like you had a good time.

I see Devon and Fashion

...i think i reconize some in the background too. Who is that grey pinto at the last pic in harness? Looks familure

Those pictures are neat to see! Thanks for sharing them with us

I think that is the Murrays stallion Filipowicz Entertaining the Foulks. Walt or Fran will have to come on and verify that. I think it is also Amy driving him.

afoulk said:
LeeanaI think that is the Murrays stallion Filipowicz Entertaining the Foulks. Walt or Fran will have to come on and verify that. I think it is also Amy driving him.

I thought he looked familure, i knew i had seen him around here before ..

It was so nice to meet you Walt and Fran!
F

Yes, That is Filipowicz Entertaining The Foulks and Amelia was driving him. Walt drove him around to warm him up before he was shown. They also had Filipowicz Grande Finale and Filipowicz Thats High Society making her Canadian debute. We had a great time. Wonderful meeting you Devon your mare is beautiful and love her foal. We will try and bring some horses to show in Canada next year. Thanks everyone for making us fell so welcome.

So nice to see you again Fran and Walt

You did a great job of announcing Fran and Walt, you were great at handing out the ribbons. I hope you come back again. Sorry we had to leave early.

YES, in spite of the rain - we had a wonderful show. It was such fun to have Walt & Fran with us for the day -- I think they have become honorary Canadians.

Sorry I took so long to reply here -- spent most of today with my mom at hospital-- she had a slight stroke -- but was able to go home again -- she turned 94 on AUg 1st & still lives in her own apartment so we are very blessed.

I got some nice pictures of Walt driving Filipowicz Entertaining The Foulks . He looks darn good in the cart -- I will try to post one on here ( Joe isn't here to guide me so may not work )

Leeanna -- I drove ET for the first time in Ashland & got a 3rd place so was pleased -- yesterday was only our 2nd time in the show ring . He is only 3 this year os he is doing fantastic. So is Finny.

Fran forgot to mention -- FILIPOWICZ FOULK LORE was the Champion mare fo the day & Maybe?? Gr Ch mare -- I am not sure about that . LORE is owned by John & Arlene McCallum.

So Walt & Fran picked a good day to come to Canada for a show & see their horses doing great in the ring.

We will be thrilled if they come & bring a horse next year.

Joseph was unable ot be with us to shwo yesterday as he was playing the Provincial Finals in a Lacrosse tournament. THeir team won the Provincial Title so they are have a celebration party tonight. He should be back on the job tomorrow to get ready for Hanover sanctioned show next Saturday.

Will see if I can do a picture here now. 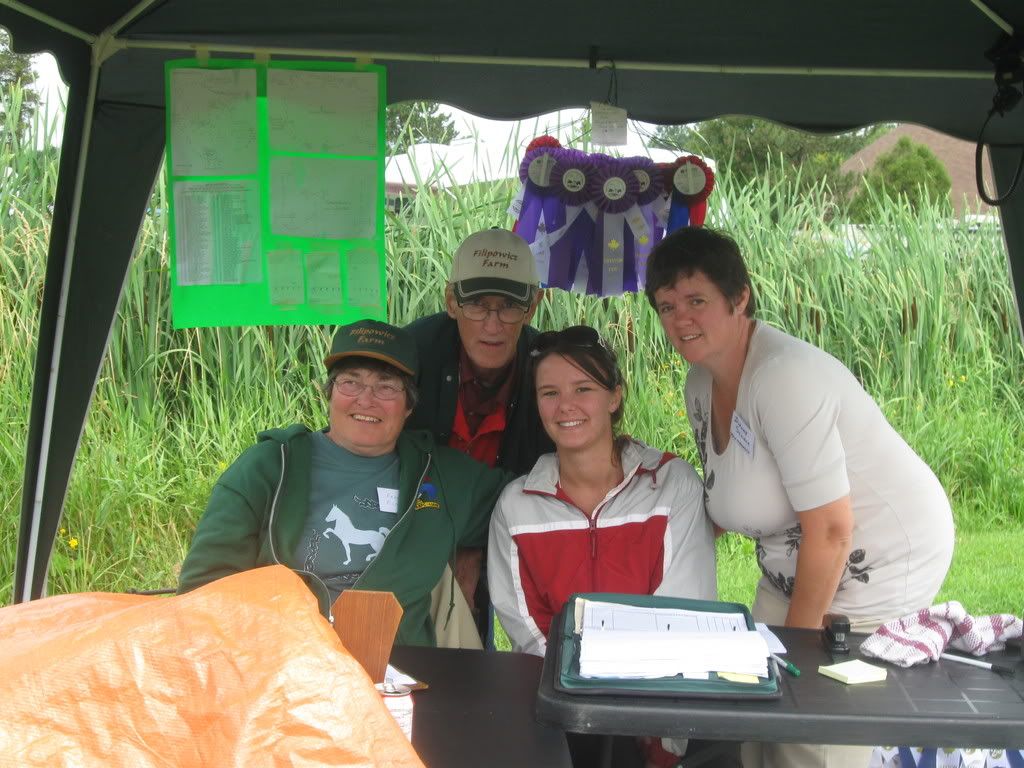 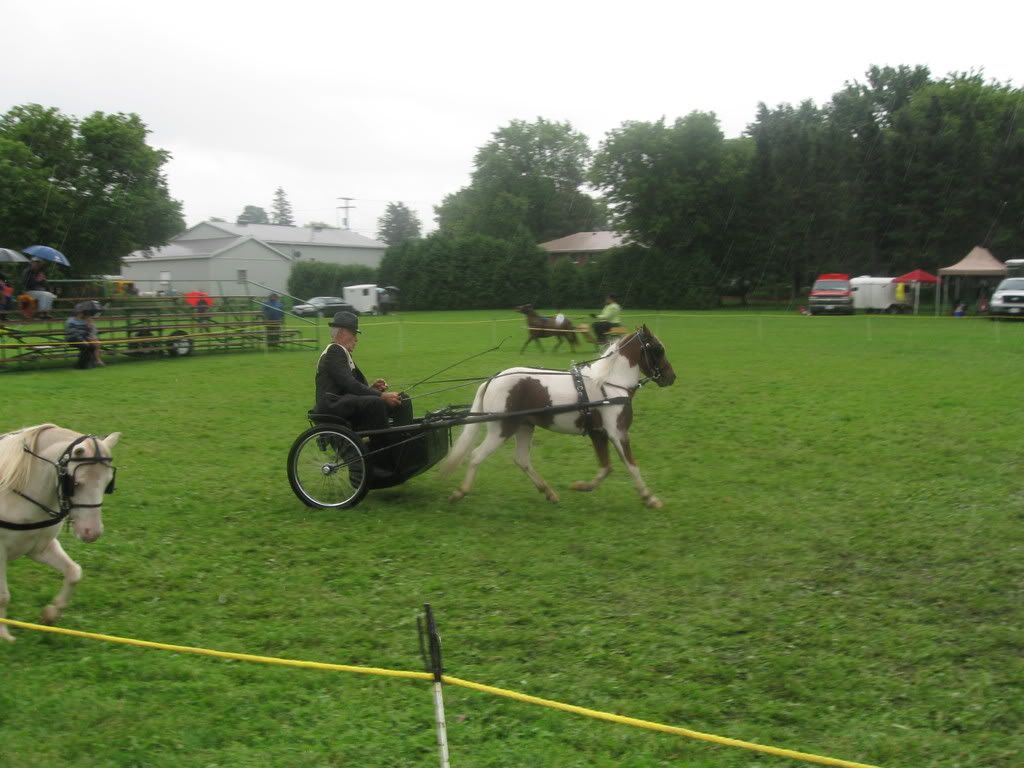 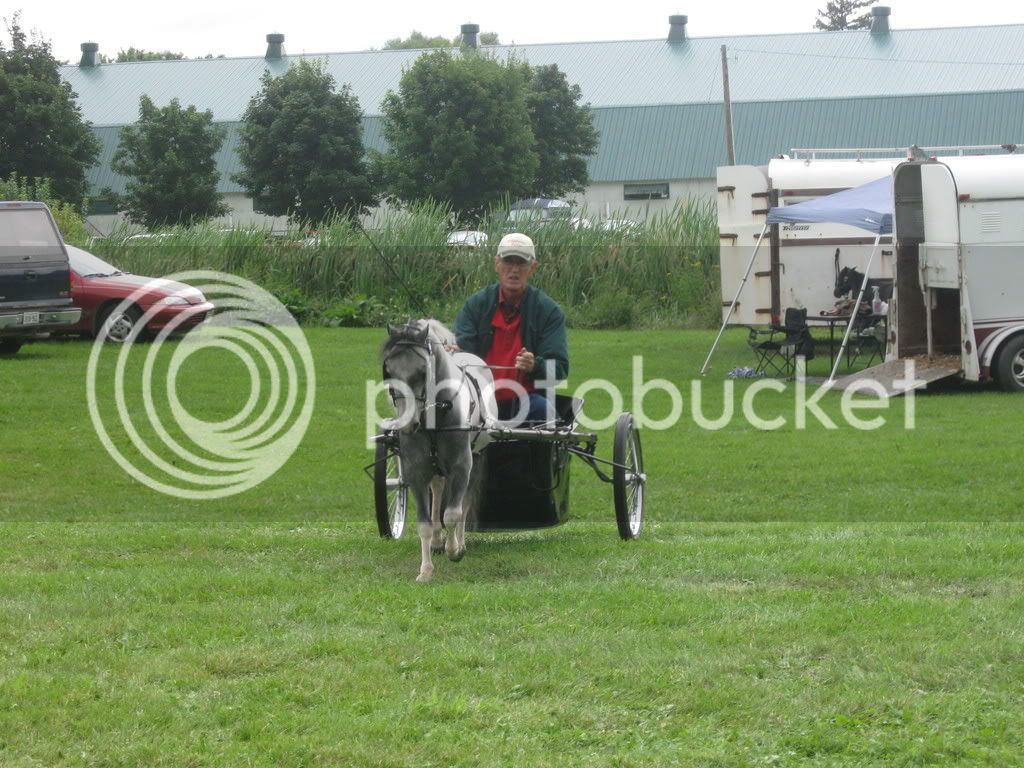 Jami Batte- Dianne's show helper & John & Amelia's granddaughter -- Jami used to also show with us -- so she pinch hitted as show person in a few classes
Last edited by a moderator: Aug 10, 2008

Great pictures! Glad everyone had a great time and congrats to everyone on their placings.

Looks like you all had a great time. Walt looks good driving. Great Pictures and Congratulations on all your placings.

Yes, I thought Walt looked pretty good in that cart-- maybe we can get him showing more. He did well with Miss Jo-CO at the Ashland show as well.

Our grandkids turned out in good form to watch us show in spite of the rain. ALL of our 6 great grandkids were there-- making 4 generations of our family at the show. Not bad eh?? I can hardly wait until they are old enough to get into the show ring -- a whole new generation coming up.

I got my first look and picture of the newest baby -- born last Monday-- Brody David John GIbson-- I am betting he was the youngest at the fair.LOL --His daddy Jessie showed for years with us when he was little.

Thanks everyone for your nice comments -- we had a good show and a good time.

p.s -- I am hoping that last blast of rain did NOT wreck Lori Rafter's beautiful hat. It is gorgeous. Lori is always good competition . She was driving in the Country Pleasure class when that last blast hit & the show got called.

A special thanks to Desiree's friend Anthony form Quebe who gave me some batteries so I could finish taking pictures. Good luck to Des at the Nationasl -- she has had an awesome year.

Our judge was Marvin Subbert from Illinois -- this is Marvin's 2nd trip up to Ontario to judge and he did a great job -- never even complained about the weather . Our own John WIlls (Ontario)was the apprentice judge. John used to show with this group unitl Kathy got ill. Sure nice to see him back around the minis again.

Bud Stephenson was our steward -- always a favorite with this crowd. We all wish Bud well in the upcoming election as well.

Oh looks like fun even though it was raining!! Hope to see you all next year Ill be there!
R

Thanks for the pictures Walt.

I see me in the background of one of them, bending over to wipe the mud off of Dream's legs yet again.

That was a never-ending battle. I swear that I'm going to refuse to show anything but mud or dirt coloured horses one of these days.

All in all, it was a great day.

Many thanks to Diane and the rest of her management team for making it another enjoyable, well-run show.

Marvin was GREAT, kept a good sense of humour throughout the entire rainy day.
Last edited by a moderator: Aug 11, 2008

WHAT?!?! They let you and Fran back into Canada AGAIN?!?! LOL!!!!!! I'm glad they did, actually! Glad to hear you didn't get lost, either, knowing how good you knowledge of Canadian geography is, Frannie! HaHaHaHa!! Did you have to swim across the river again, Walt, or did you find a different route? So sorry I missed seeing you guys again. Are you coming up for the show this Saturday?

Great photos of everyone!
F

.No, Judy we are staying in the states this weekend have to catch up on chores around the farm. I see you will be the judge sorry we wont see you. Hopefully the weather will be nice. Take Care and keep in touch.

I loved that hat before the show Amelia and I REALLY LOVE it now! It shed the water like a duck and is none the worse for wear.

That last big blast of wind and rain just about knocked me out of my cart as I was heading into the ring and Dream and I were both glad to hear them call the class off. I saw several other lovely driving hats that are all but ruined if not totally so and I grabbed my sister's hat off her head early in the day and tucked it into the trailer to keep it safe. I doubt very much that Carolyn's hat poor will see the inside of a show ring again

But despite the rain it was a wonderful day and we had a great time! All our horses did well again and we enjoyed the day. Dianne and the gang put on a really good show. I was totally impressed with Marvin Subbert who had every reason to be miserable and yet he stayed cheerful throughout the entire show - that umbrella had to have gotten heavy by mid day! He even took the time to chat with the kids in showmanship and give them some advice while rain dripped off his nose - terrific judge. Fran, you did a great job as announcer and Walt, you make a great ring steward/ribbon man.

Lori it was great seeing you and your sister and kids again. Walt and I love coming to Canada we have such a great time with a wonderful group of people.I loved your hat and see that most of you wear hats for driving. Wishing everyone good luck and great placings in this coming weekend show. Keep the email and jokes coming. Take care Frannie
You must log in or register to reply here.

Aug 11, 2022
minihorse
M
K
Help figuring out if my mini is pregnant, please