We took Honeybee and Thistle to a local trail. It was Bee's first off property trail drive ever! She was incredible. A little looky, but otherwise an angel. She walked right over a bridge without a care. She acted like she's always done it. I think she's so good about it because we take the girls on hikes and whatnot so she's used adventures. She was also very good about bikes! 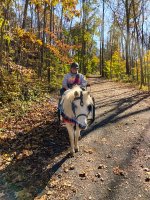 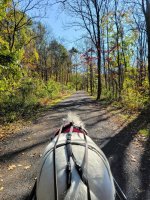 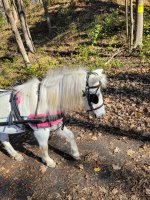 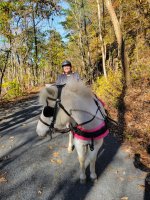 What a gorgeous place to play! Is that a Myler bit?

Beautiful place to drive with all the leaves changing colors! You got both ponies in your van, that’s awesome, great video!

That is wonderful! Your little gal is stepping out like she owns the park, also love the smile on your face! That says it all!

Beautiful photos and video! Thank you for sharing!

What a beautiful trail! Great job on her first outing too!

Marsha Cassada said:
What a gorgeous place to play! Is that a Myler bit?
Click to expand...

It's not! I can't remember the brand. I think maybe coronet?

I took Stormy to the park today to roller skate. We made lots of people smile and definitely gave them something to talk about. Tons of people were filming us and I forgot to put lipstick on

I guess it isn’t everyday you see a lady being pulled on roller skates by a mini horse. He did AWESOME! Nothing fazed him, bikers went flying by, lady with her big fluffy balloons, crazy dogs not on leashes, and then there was Stormy just chilling and strutting his stuff. 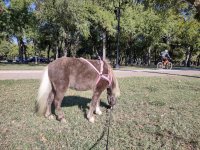 Look for us on instagram, one guy promised we would be famous!! LOL LOL

I mean, I know nap time is 2pm, but seriously Stormy, come on!! LOL 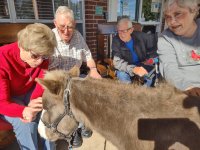 He gave this lady a kiss and I tried to capture it in the photo, but I just barely missed it… 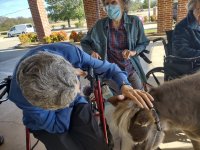 He was the STAR of the show…. Until they had to take a man away by ambulance!!

Nice that he was so relaxed! What a sweet therapy horse.

Just looking at your photos made me nice and relaxed!

We walked to the elevator again today. Lovely weather to be out. I was pleased that Midnight was back down to 260 (she was 280 at the vet a few weeks ago). You can see the red LED lettering of the scale in the background. Munchkin and his owner were on the scale also so the readout isn't just for her.
On the way back to the trailer, my legs got weak so I had to sit down in the street to rest. I had Dapper Dan and Midnight with me. Munchkin's owner came up behind us and Midnight kicked Munchkin! She missed the horse and got the owner. What in the world??!! Midnight has never offered to kick--ever. The two do not seem to like each other; when walking beside each other they both keep their ears back. We are all trying to figure out what is going on between them, but we are not horse-psychologists enough to understand. But to kick--that is very weird.
The only other discordant event was passing some guys cooking hamburgers with their vulgar hiphop music playing very loudly. Why would anyone choose to listen to that?
One other 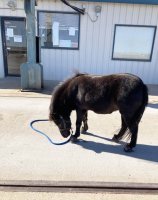 thing that bothered me is the other two owners refuse to walk on the correct side of the street. This means a passing car has to drive between us. It is a minor annoyance, but puts me on the defensive.

Annie has occasionally done things like that just showing who is boss. Even if Midnight isn't the boss at home she might be trying to be higher than Munchkin in your group.

Edited to add: Good job on the weight loss. Wondering if you were able to get the grazing muzzle to fit?

Willow Flats said:
Annie has occasionally done things like that just showing who is boss. Even if Midnight isn't the boss at home she might be trying to be higher than Munchkin in your group.

Edited to add: Good job on the weight loss. Wondering if you were able to get the grazing muzzle to fit?
Click to expand...

I was supposed to try on Munchkin's muzzle, but we had trailer woes and that didn't work out. The one I bought was gigantic. I returned it. It was a Tough 1. Not sure I will be able to find a tiny enough one for her little face.

Maybe that is it. Dapper Dan is fine with Munchkin. And all of them like my sister's mare. We'll just keep these two on opposite sides. I'm glad to hear someone else's horse has behaved that way.
T

Maybe she was protecting you? If she already doesn't like Munchkin and you were sitting down I could see that. Some horses don't get along just like some people don't, I wouldn't worry about it.

Wow! That was an adventures for sure. I'm glad all are ok.

I think she started it! It's kind of funny to watch them, but we'll be more careful about keeping them apart from now on. So glad they are LITTLE horses!

TRT - Clearfork
I just couldn’t stand it! I just had to take Stormy & the new bike to the park today. The bike was sooooooo easy to assemble/disassemble and fit perfectly in my van. We had the best time 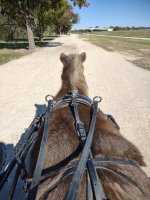